The British Solomon Islands Order 1964 provided for a new constitution, with the High Commissioner as President and eleven official and ten unofficial members. The major change was the election of eight of the ten unofficial members. The first elections to the Legislative Council were held on 7 April 1965. In Honiara, the member was elected by direct election and universal adult suffrage, while in the other seven constituencies members were elected by electoral colleges, which were elected by the Local Council in each constituency from among its own members on the basis of one elector for about every five hundred people. The 1964 Constitution was replaced by the British Solomon Islands Order 1967, which provided for a Legislative Council consisting of three ex-officio members, fourteen elected members and not more than twelve public servants. In 1970, the 1967 Order was replaced by a new one by which a Governing Council replaced the Legislative Council (1970-1974).

Solomon Islands history was made in 1965 when Lillian Ogatina (later Poznanski) from Kia, Isabel Island attained national prominence through her election to the Legislative Council as an unofficial member, defeating four other candidates to become its first (and only) female member. (NS Oct. 1960, 21 May 1966; BSIP Legislative Council Paper no. 22, 1969, 'Report of a Special Select Committee on Interim Proposals on Constitutional Development', Apr. 1969; AR 1969, 138, AR 1970, 108-109) 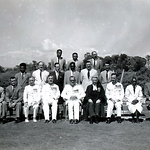