Leonard Alufurai was born in Lau Lagoon, Malaita in about 1925 and educated at St. Mary's School in Maravovo (q.v.) and All Hallows' School at Pawa (q.v.), on Ugi Island. He subsequently completed secondary School in Auckland at Te Aute College and later St. John's College. He was made a deacon of the Diocese of Melanesia in 1952, and ordained as a priest in 1956, the same year he became the Rural Dean of Malaita. Alufurai returned to Honiara in December 1958 after spending almost a year in New Zealand and England, where he had accompanied the Bishop of Melanesia, A. T. Hill (q.v.). He attended the General Synod in New Zealand as a member for Melanesia. He was appointed to the new Legislative Council and the Executive Council in 1960 and was also a member of the Malaita Council. In May 1961, he travelled with Francis Bugotu (q.v.) to represent the Diocese at a missionary conference in Samoa, and attended other conferences in Fiji and Samoa in March 1962. On 30 November 1963 he was consecrated as Assistant Bishop of the Diocese of Melanesia, along with his contemporary Dudley Tuti (q.v.). They were the first Melanesians and the first Solomon Islanders to become Bishops in the Anglican Church. Alufurai was awarded an O.B.E. in 1964.

In April 1966, Alufurai represented the Diocese at the General Synod of the Province of New Zealand, and that June he attended the Pacific Conference of Churches in the Loyalty Islands, New Caledonia. Upon the formation of the Province of Melanesia in 1975, Alufurai became the first Diocesan Bishop of Malaita.

As Diocesan Bishop, Alufurai tried to bring renewal to the diocese through the formation of a team ministry that toured the diocese. His term as Bishop included two major controversies. The first concerned Jonathan Ilala, a man from west Fataleka who claimed to have had a vision of the Cross of Christ on Christmas Day of 1973. Ilala and a small group of other visionaries came to strongly influence Alufurai and acted as his advisors, which caused doctrinal divisions in the Church. His second problem related to the finances behind an unauthorised residence he built at Auki. In 1980 he resigned under pressure from the Archbishop and the Council of Bishops. He eventually joined his son Alfred, also an Anglican priest, in his promotion of charismatic and healing movements in the Church of Melanesia. In 1989, Archbishop of Melanesia Amos Waiarau (q.v.) asked Alfred to cease his charismatic renewal activities, but he refused and instead joined the Rhema Family Church based in Oklahoma with a branch in Australia. A year later, passed over in a leadership conflict, Alfred Alufurai founded his own church, the Church of the Living World, which his father joined. Both of these churches are Baptist in theology and require adult re-baptism. 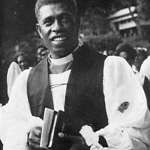