Lilly Ogatina , from Kia on Isabel Island, was born on 14 April 1942, and attained national prominence in 1965 through her election to the Legislative Council as an unofficial member, defeating four other candidates to become its first (and only) female member. Her father was George Rubaha, a literate Anglican catechist and her mother was Lusuai. She was one of the first Solomon Islands women to be sent by the government to study overseas, and spent seven years at Queen Victoria School in New Zealand. She returned to begin primary teaching at St. Hilda's School at Bungana and on 2 January 1966 married Aubrey Poznanski, a part-Polish part-Gilbertese member of staff of the Marine Department. Their first child, Aubrey Teaito, was born on 15 August 1966, and was followed by a daughter, Audrey. Two other children joined the family as adoptees.

Poznanski stood unsuccessfully for the Honiara seat in the Legislative Council (q.v.) in 1967, and then resumed teaching at the Government Primary School in Honiara. In September 1969 she was elected unopposed to the Ngosi Ward of the Honiara Town Council. The next year she became Assistant Clerk to the Governing Council (q.v.), while assisting part-time with a garage business run by her husband. In 1978, she was Chief Administrative Officer with the Ministry of Foreign Trade, Industry and Labour, and the most highly paid woman in the Solomons. Throughout her career she maintained close links with her rural kin. As one of the few traditional women leaders in the Solomon Islands she led her Zabana people in efforts to reconnect with their Logahaza origins, a link ruptured in the late nineteenth century by raiding. 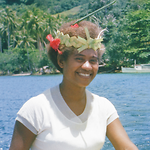 Title
Lili Ogatina Poznanski was the first women to take a senior role in politics when she was elected to the Legislative Council, 1965-1967 and later became a senior public servant.
Type
Image
Date
1960s
Source
DOM