Alfred Thomas Hill was born on 2 November 1901 and educated at Wolverhampton Grammar School. In his youth he was an active scout and served as a coastwatcher in England. He qualified as a Master Mariner, with an Extra Master's ticket, and at one time commanded a 20,000-ton passenger liner. He retired from the sea and became a lay missionary in the East End of London, where he worked for five years. He joined the Melanesian Mission (q.v.) as a layman in 1936, and worked in New Britain for two years before becoming captain of the Melanesian Mission's 14-ton vessel Cecil Wilson. He was ordained a deacon in 1938 and a priest in 1939. In 1938 he was called to All Hallows' School at Pawa (q.v.), on Ugi Island, as Headmaster, where he remained until 1953. The school had an excellent reputation under his control. In 1954 he was almost unanimously recommended by the Diocesan Synod to be the next Bishop of Melanesia. On 30 May 1954, he was consecrated in All Saints' Cathedral (q.v.) in Honiara, the first Anglican Bishop to be consecrated within the diocese. He was appointed to the Advisory Council (q.v.) soon after, and later to the Legislative Council (q.v.). Hill was away from the Protectorate for more than a year from mid-1958 to February 1959, touring England, New Zealand and various Pacific colonies.

Hill had little theological education and behaved like a gruff but big-hearted schoolmaster, and was liked by all. He widened the Church's interest in education, strengthened the Melanesian ministry, assisted the Melanesian Brothers (q.v.) to extend their work to Papua New Guinea, and expanded the Church's medical work. Above all, Hill prepared his old Pawa students, Dudley Tuti (q.v.) and Leonard Alufurai (q.v.), for the episcopate. He retained the style of a crusty sea captain while Bishop. James Tedder (q.v.), who remembered Bishop Hill from his Pawa days and through his years as Bishop, described him this way: 'He "called a spade a spade" and told ribald stories much to the embarrassment of his Archdeacon but he was a fine headmaster and an inspiring Bishop'. (Tedder 2008, 87) Hill never married. He retired in June 1967, and after an extremely lengthy retirement circuit, he took up an honorary appointment as Chaplain to the Melanesian Brotherhood in New Britain. He was awarded an M.B.E. in 1951 and a C.B.E. in 1961. He died on 27 August 1969 in Rabaul and was buried in the garth of St. Barnabas' Cathedral in Honiara (q.v.), which he had initiated as Diocesan Bishop. (NS Feb. 1959, 7 May 1966, 7 Sept. 1966, 31 Aug. 1969; AR 1969, 7; Fox 1958, 238-239) 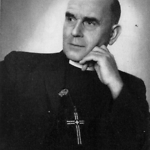