Charles Morris Woodford was born in Gravesend in Kent, England on 30 October 1852, the eldest son of wine merchant Henry Pack Woodford. He was educated at Tonbridge School and then joined his father's business in 1871 and worked there until 1881. His wanderlust took him to Australia and then Fiji, where he worked as a naturalist for almost a year before joining the colonial administration in 1882. In 1884, he took the opportunity to sail to the Gilbert and Ellice Islands, collecting insects, which, with those collected in Fiji, were forwarded to the British Museum's Natural History section. His Pacific adventures in these years set his course for the future. He returned to England in 1884 and prepared for an expedition to the Solomon Islands. Delayed in Brisbane, he eventually reached the Solomon Islands in April 1886 on the Fiji labour recruiting vessel the Christine. The ship visited several New Hebrides islands and Ugi, Santa Ana, Makira, Ulawa, Malaita, Guadalcanal and Alu, the largest of the Shortlands Group. He remained on Alu from June to August 1886 and then moved to Fauro Island in the same area, remaining there until mid-September. Fever caused him to cut short his collecting trip, but he spent two weeks on Guadalcanal before returning to Australia, from where he sent specimens home to England.

Woodford returned to the Solomon Islands in January 1887, spending two weeks at Roviana Lagoon in New Georgia and six months at the village of Aola on Guadalcanal's north coast. From Aola he failed in three attempts to penetrate the central mountains. He left the islands in September 1887 for Australia and England, having collected twenty thousand specimens on the two trips. He returned again in mid 1888 and spent two weeks in Roviana, three months on Nggela and one month at his Aola house on Guadalcanal. During his travels, his motivations altered as he began to spend more time on exploration and anthropology.

Woodford returned to Fiji in 1894, and after the British and German annexations in east New Guinea in 1884 and adjustments of the German border south into the Solomon Islands, he began to campaign to have Britain take possession of the Solomon Islands. Backed by High Commissioner Thurston, he was appointed as the first Resident Commissioner of the British Solomon Islands Protectorate in 1896. He arrived in the Solomon Islands at Santa Ana on HMS Pylades on 30 May 1896, after which the ship cruised the islands in the archipelago until 24 July when he was left at Gavutu and the Pylades departed for Queensland. His only 'equipment' was a new 8.2 metre (27 foot) open whaleboat, six Fijian policemen and a once-off £1,200 grant-in-aid. In August, Woodford spent nearly three weeks on Guadalcanal investigating an attack on the crew of the Austrian naval vessel Albatross, and then proceeded to Ugi to investigate the murder of local trader Hamilton Wright. He re-joined the Pylades at Ugi on 14 September and was returned to Gavutu. He purchased Tulagi as the Protectorate's headquarters on 29 September for £42. On 4 October, he sailed for Sydney on the steamer Titus, which called at Aola, Marau Sound and two passages at Makira on its way, and arrived on 16 October. By 25 November Woodford was back in Fiji and about to return to the Solomons. (C. M. Woodford to Sir John B. Thurston, 25 Nov. 1896, in No. 8 Western Pacific, C. M. Woodford, 'Report on the British Solomon Islands', Mar. 1997, CO 225/50, microfilm 2329)

During his years as Resident Commissioner (1896-1915), Woodford was the dominant figure in the Solomon Islands. With very few staff and little money he struggled to extend government authority, mainly by stopping fighting and raiding, and expanded plantation and expatriate economic activity. He supported alienation of land to Europeans, particularly for use as plantations, as a way of increasing revenue. Like many others at that time, Woodford also believed that Solomon Islanders would soon die off, which affected his view of land tenure and the possibility of importing Asian labour, although the latter never eventuated. He expanded his administration from his sole tenure plus police to a permanent European staff of eight or ten, and managed to open regional bases throughout the Protectorate. During his years as Resident Commissioner Woodford continued his interest in ethnology and natural history and he provided small collections for several museums. He retired in 1915, replaced by Frederick Joshua Barnett (q.v.). Woodford died in Sussex on 4 October 1927. (Tennent 1999; Heath, 1974; O'Brien 2011; Woodford 1886, 1888, 1889, 1890a, 1890b, 1896, 1897, 1906, 1908, 1909a, 1909b, 1916, 1922, 1926) 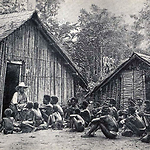 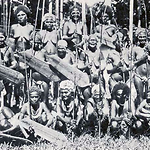 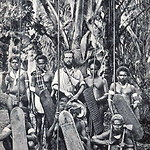