The first Government House, occupied at Tulagi by Resident Commissioner Charles Woodford (q.v.) in 1897, was a hut near the beach. During 1896 he had lived in temporary quarters on nearby Gavutu. A more substantial Residency was built in 1898 about sixty metres up on a ridge overlooking Tulagi Harbour, and in 1905 this was replaced by a larger Residency nearby, which served until it was condemned in 1933 due to a white ant infestation. The fourth Residency was built that year and occupied in 1934. The first Government House in Honiara, on the beach abutting Mendana Avenue, had been a U.S. officers quarters and then a New Zealand military hospital. Resident Commissioner Colonel O. C. Noel (q.v.) was the first to occupy the building in 1944 after New Zealand Army nurses moved out. After 1952, this became the Residence of the High Commissioner of the Western Pacific. The building was replaced in 1967 by a new house designed by Messrs. Warren and Mahoney, architects from Christchurch, New Zealand. The new Government House came into use in mid-1969 and the old one was demolished. The Governors-General declined to use the new, grand late-colonial house, preferring other accommodations. (BSIP Handbook 1911, 23; NS 21 Jan. 1967, 15 May 1969) 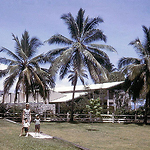