Maasina Rule (also sometimes called Maasina Ruru, Marching Rule, Masinga Lo, and Masinga Rule) began in 'Are'are, Malaita in early 1944, at a time when many Malaitans were working in the wartime Labour Corps on Guadalcanal and Nggela. Maasina means 'his brother' or 'his sibling' or even 'his friend'. Arisimae (q.v.), Aliki Nono'oohimae, Hoasihau, and Nori from 'Are'are, joined later by Timothy George Maharatta (q.v.) from South Malaita, conducted meetings aimed at radically reorganising Malaitan society and seeking more Malaitan control over their own lives. They were influenced by some of the American servicemen, including African-American soldiers, whose humane treatment of and political advice to Solomon Islanders encouraged them to make a stand against the old colonial system. The leaders spread a message of Malaitan independence across the island. In its seminal form Maasina Rule advocated improvements in agriculture, concentration into larger, cleaner villagers, and codification of indigenous law. These teachings were coupled at some stages with hopes for American liberation and millenarian ideas, although this aspect of Maasina Rule was often fabricated or exaggerated by government officials, and later by anthropologists and historians influenced by their accounts. Maasina Rule soon spread to all areas of Malaita, and to neighbouring islands, particularly Makira and parts of Guadalcanal. For eight years, the movement dominated the political scene in the central Solomons. It was an indigenous proto-nationalist movement grounded in a desire for self-government and self-determination.

In retrospect, Maasina Rule was an astonishing development: people of diverse and once divided Melanesian societies came together to confront the might of British colonialism. Though the aspirations of many followers were unrealistic-especially those who hoped for American intervention and independence from Great Britain-Maasina Rule did strain almost to breaking point the Protectorate Government, still weak after the Second World War. The factors which made this possible include shared Islander experiences within the exploitative indentured labour system, first in the Queensland and Fijian labour trades and then in the Protectorate itself; the influence of Christianity and literacy; decades of ineffectual colonial administration that provided people virtually no social services; and disappointment at dashed expectations of benefits that would follow from cooperation with Europeans, becoming Christian and ending warfare. The wartime experience was a catalyst for resentments that had been growing, particularly during the Great Depression when labourers, particularly Malaitans, suffered from the crash of the plantation economy, which had been their main source of money and goods.

The basic message of Maasina Rule was that Malaitans had the right to control their own affairs and the movement instituted various measures to form their own government. Of the ten original Maasina Rule chiefs, five came from one church, the South Sea Evangelical Mission (now Church) (q.v.), which was used as a web of contacts. Initially strongest in 'Are'are in the south, by late 1945 the movement was well on its way to being an alternative government across Malaita, refusing to allow men to labour away from Malaita. In 1946, an estimated 95 percent of Malaitans were adherents. Malaitans dominated the Solomons plantation labour force (over 60 percent of workers), and their refusal to work distressed a government anxious to get the war-devastated Protectorate economy back on its feet. Malaitans also collected and codified kastom (q.v.), much in the way that the British officials had instructed them to codify 'custom' before and just after the war for use in nascent Native Courts. Kastom was, however, much different from 'custom', including as it did many new and novel concepts and practices on which Malaitans would base social reform, and forbidding as it did many older practices thought to be socially divisive. Kastom was the foundation of Maasina Rule's political ideology, and Maasina Rule courts employed kastom codes to arbitrate and in some cases adjudicate disputes free from government interference.

Beginning in late 1946, the movement held several meetings with Malaita's District Commissioners and the visiting Resident Commissioners Noel (q.v.). The early meetings were friendly. In early 1947, the chiefs informed the government that they were planning a formal strike, and sought advice on how to do so (which was refused). Leaders said the minimum wage for labourers should be £12 a month, which strained Maasina Rule-government relations. The Lau region's Head Chief was arrested (for a non-political offence), and the District Commissioner recruited fifty Malaitan labourers to work in Honiara. In June 1947, six to seven thousand Malaitans, most of them from the northern half of the island, met with the District Commissioner and his officers in Auki, at that time the largest meeting ever held in the Solomons. Among other things, leaders demanded the government recognize kastom law and courts, and their appointment of men called alaha'ou'ou to head them. Meanwhile, Maasina Rule had been spreading to neighbouring islands and as far as the Western Solomons, although it found few followers there.

The British government launched Operation De-Louse to arrest the leaders of the Movement for violating the British Unlawful Societies Act of 1799 and the Seditious Meetings Act of 1817, for secretly conspiring to overthrow the government and holding illegal courts. The main chiefs were sentenced to six years hard labour. Malaitans responded with a massive campaign of civil resistance, refusing to pay a newly imposed Head Tax, submit to a census, or cooperate in any other way. Most villages erected small fences to delineate kastom and British jurisdictions, and a few even built stockades to keep out government officers and police. A series of government operations from 1948 into 1952 employed Western Solomon Islander police to arrest many thousands of Malaitans, and many Makirans as well, most of who lined up peacefully for jail. This suppression did little to quell the resistance and in fact greatly heightened resentment. It left the British embarrassed by overflowing prison camps (which required no fences because the prisoners did not run away). Reading the archive, it is clear that officers were at a loss as to how to resolve the situation, and their response for several years was simply to increase suppression. The result was a spiral of ever more arrests and heightened resentment and refusal to cooperate.

In early 1950, a new Resident Commissioner, Henry Gregory-Smith (q.v.), took a more conciliatory approach than his predecessors Owen Noel and J.D.A. Germond, and met first with 'Are'are Head Chief Nono'oohimae, and then the other imprisoned Head Chiefs. He soon released them on license on their vow not to oppose the government and to support government plans. He promised Malaitans an eventual island-wide council, with half its members elected, if they would stop resistance, but the populace turned down his offer. In the north, most of the Head Chiefs were soon rejected by the people, and eventually even Nono'oohimae in 'Are'are lost much of his following. The movement was now being led by several men, most notably Eriel Sisili (q.v.) of west Kwara'ae, Takanakwao, a former policemen, and Salana Ga'a (q.v.) of Kwara'ae, Eban Funusau of Fataleka, Jasper Irofiala of Baelelea, and 'Abaeata Anifelo of east Kwaio. This phase of the movement had several names over time, but is generally known in the literature as 'The Federal Council'. The Federal Council was an attempt to create a 'federation' of autonomous Malaitan 'tribes' or language groups, which may have had the American federal system as their model. Resistance continued, though Malaitans stopped lining up for prison and instead fled inland. Though some recruited for shorter-term labour contracts, or submitted to a census and tax in order to avoid further imprisonment, non-cooperation remained the order of the day. The government found itself fully despised and hamstrung, unable to reassert any real control or pursue plans for the future.

Malaitans were remarkably efficient in presenting their views and analyses. Multiple copies of letters were widely circulated on the island, including in 1949 a nine-page manifesto of grievances written by Sisili, and read to the District Commissioner at an Auki meeting. Officers were told that Malaitans demanded locally run courts and councils, and a single overarching council with a Malaitan leader, among other demands. A series of officers and Resident Commissioners continued to insist that only if every Malaitan paid the tax and participated in a census, would arrests stop, and a Malaitan would be chosen to sit on the Protectorate Advisory Council, (although they planned to appoint a minority, loyalist Headman). Most Malaitans refused these terms. Sisili was arrested in a night raid and sentenced to a long prison term for sedition, but the movement continued under the other leaders. Gregory-Smith and his officers made plans for further mass arrests and systematic harassment. However, in 1952 a new District Commissioner Val Andersen wanted to try a more conciliatory approach to break the deadlock, recognizing that suppression had failed, that many Malaitan grievances were legitimate, and that rapprochement was necessary. His softer approach had only mixed success among the now-bitter and suspicious Malaitans, but was bolstered by a new High Commissioner, Robert Stanley (q.v.), who arrived in Honiara in late 1952 when the Western Pacific High Commission headquarters was transferred to Honiara. Stanley quickly met with the Federal Council leaders in Auki. The ground for cooperation tilled by Andersen's work enabled Stanley to grant Malaitans most of what they asked for, and in fact many did not in fact want the government to fully depart. The most important agreement was for the formation of an island-wide council that would fully represent Malaitans, be headed by a Malaitan President, and take considerable responsibility for the management of local affairs.

The administration did offer to set up a whole-island council along the lines of Native Councils already operating in other parts of the Protectorate. In July 1952, twenty-nine of the forty delegates to this proposed council met at Auki, although the rest boycotted the meeting. In September, the new High Commissioner visited Malaita and held discussions with all factions. He proposed the establishment of a Malaita Council with delegates from all parts of the District and undertook to accept a leader chosen by the delegates, to be appointed as President of the new council. The offer included appointing the President as a member of the BSIP Advisory Council, provided he agreed to recognise the authority of the High Commissioner and would work with the District Commissioner. 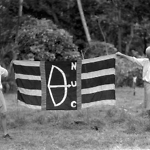