Timothy George Mahratta was born in the Burnett District, near Bundaberg in Queensland, Australia in 1892. His father, Tolimcane (Thomas), from Small Malaita, was recruited by the Fearless in the mid-1880s to work in the sugar industry, served three years in Queensland, and returned to Malaita on the same vessel. The woman he was arranged to marry had married another man and he recruited again for Queensland, where he married Makeni (Maggie) from Small Malaita. Tolimcane became a teacher in the Queensland Kanaka Mission (q.v.) founded by Florence Young (q.v.), who encouraged him to gain a European education. Timothy attended three primary schools around Bundaberg and three in the nearby Isis District as the family moved about for work and mission reasons. By the early 1900s Tolimcane had a small cane farm near Bundaberg, ran a few head of stock and employed several of his countrymen. Although eligible to stay in Australia, he chose to return home with his family in 1906 or 1907. The couple became SSEM missionaries on Small Malaita and Timothy attended the SSEM Onepusu School on Malaita's west coast. He left after just six months because his Queensland literacy and numeracy meant he was expected to be a teacher rather than a student.

Timothy was probably the best-educated Solomon Islander of his day, but he was always dissatisfied that he was denied further education, and unhappy with his 'native' status. He worked aboard SSEM, Malayta Company and Levers Brothers vessels, travelling throughout the Protectorate and as far as Australia and New Zealand. In Small Malaita he lived at Pau and then shifted to Papaarah. Because of his sophistication, Mahratta was the only Malaitan with a permit to carry a shotgun to shoot pigeons. In the 1920s he married Mizpah and became an influential Village Headman on Small Malaita, although he lost this position in 1925 when he committed adultery. He then moved to become storekeeper for the Mala Timber Company. When Maasina Rule (q.v.) began, almost inevitably, he became the Head Chief for Small Malaita, and for a time some saw him as the overarching leader of the movement. He was imprisoned for three years with the other chiefs, and then reinstalled as an Assistant Headman. He remarried and was active in the SSEM. He ensured that his children received the best education available, and one of his grandchildren, Alex Bartlett, became a Cabinet Minister and Secretary-General of the Supreme Council of the Malaita Eagle Force in the late 1990s and early 2000s. A misfit all of his life, and, as Peter Corris described him, a 'man who lived before his time', Timothy George Mahratta died in April 1969. (Corris 1973b, 131, 143-144, 147, 1973c; BSIP 14/46 District Officer William Bell to Acting Resident Commissioner, 3 Aug. 1918; 14/58 Bell to Resident Commissioner, 16 Dec. 1925) 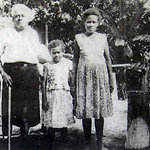 Title
Timothy George Mahratta (1892-1969) was born in Queensland and returned to Malaita with his parents in the 1900s. He became Headman on South Malaita and later a leader in Maasina Rule. He is shown here in old age with some members of his family.
Type
Image
Date
1960s
Source
Clive Moore