Maekali was born in To'aba'ita in north Malaita. As an adult he joined the South Sea Evangelical Mission, although he never gained more than rudimentary literacy. He joined the constabulary, which he led for twelve years under District Officer William Bell (q.v.). He was in charge of Auki station in 1927 when Bell was killed on the other side of the island in Kwaio, and subsequently took command of a section of the punitive expedition there. He was one of those responsible for atrocities committed by north Malaitan police against Kwaio people.

His authority was widely respected throughout To'aba'ita. Anthropologist Ian Hogbin (q.v.), who conducted research in Malaita and Guadalcanal during most of 1934, notes that Maekali, who was then Headman at Malu'u, was regarded as fair and only interfered when traditional leaders were unable to deal with problems, often cases involving compensation, adultery or bridewealth distribution. Maekali was Hogbin's main informant and friend, as is very evident in Hogbin's Experiments in Civilisation (1939). Generally, Maekali adjudicated issues in public in front of his house. District Officers seldom challenged his judgements. Many people grew to resent his dictatorial style, and District Officers later dubbed similarly domineering practices by Headmen 'Makelism'. Maekali particularly alienated local SSEM leaders, by systematically excluding them from positions of authority on the Native Courts and Native Councils he oversaw. Resentment of Maekali was an important reason that so many To'aba'ita people enthusiastically joined the Maasina Rule movement (q.v.) in the late 1940s, and he was forced to resign his position for a time. (Hogbin 1939b, 21, 38, 39, 143-146, 168, 171, 198, 208, 209, 216; David Akin, personal communication, 22 Sept. 2012) 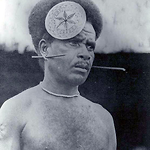 Title
Maekali was a policeman and then Headman at Malu'u. He was the main informant for anthropologist Ian Hogbin in 1933.
Type
Image
Date
1933
Source
Ian Hogbin