New Zealander Colin Hamilton Allan, was born on 23 October 1921, and educated at the University of Canterbury, New Zealand, where he received an M.A., and at Magdalene College, Cambridge University, U.K., where he received a Diploma of Anthropology. He was accepted into the Colonial Service, Western Pacific High Commission, on 20 July 1945. From August to September he underwent training at Levuka, Fiji, before arriving at Tulagi in early October. In February 1946, he was made a Deputy Commissioner for the Western Pacific High Commission, and in 1946-1947 served in the Western District, first as Assistant District Commissioner under Bill Bentley, and then from October 1946 into 1947 as District Commissioner. After a period of leave in 1948, he was transferred to the position of Assistant District Officer at Malu'u, north Malaita. After a period away in England, during which he completed a Cambridge University Master's Thesis on Maasina Rule (q.v.), he served as District Commissioner for Malaita District from 15 June 1950 to February 1952. In 1952, Allan took leave to complete legal training and was then put in charge of the Special Lands Commission Survey, the results of which were published in 1957. His next appointment was as Senior Assistant Secretary for Native Affairs, which largely involved being the Honiara officer in charge of the four District Commissioners and included a seat on the Advisory Council and many other WPHC and Protectorate committees. From 1958 he transferred to the New Hebrides where he served as Assistant Resident Commissioner and Resident Commissioner from 1966 to 1973. He became Governor of the Seychelles in 1973, and returned to the Solomon Islands as the Governor between 1976 and independence in 1978. He received an O.B.E. in 1958, a C.M.G. in 1968 and was knighted (K.C.M.G.) in 1977. He died in March 1993. (SND 17 June 1977, 31 Mar. 1993, 12; Allan 1957, 1960, 1989, 1990; Craig and Clement, 1980, 3) 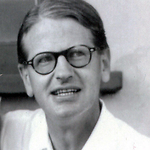