Born on 15 October 1928 near A'anangali village in east Baegu on Malaita, Frederick Osifelo was the son of Iromea (q.v.), a Police Station Sergeant who later became District Headman, Native Court President in east Baegu and a member of the Malaita Council (q.v.). With only a very basic education, Fred Osifelo began work as an orderly in the Secretariat in Honiara before transferring to become a messenger in the administration at Auki in 1946. Osifelo taught himself to read. One of his jobs was to burn the wastepaper at Auki, but instead he puzzled through the government documents. Gradually, with the help of the clerks, he learned to read with these documents as his textbooks. By 1949, he could read well enough to work as a clerk in the Auki post office and he began to help some of the local police who were illiterate to write their reports. Osifelo drew the admiration of the European officers for his self-taught literacy and his constant quest for further education. He was appointed as a Grade C Clerk in 1950 and was quickly promoted to Clerical Officer (1951) by District Commissioner Stanley Masterman (q.v.) and Senior Clerical Officer (1954-1960) by District Commissioner Tom Russell (q.v.), who admired his dedication and hard work. Another District Commissioner, Val Andersen (q.v.), also admired Osifelo's drive and ambition. In June 1961 he was chosen to travel to Port Moresby with Tom Russell (q.v.), then Senior Assistant Secretary (Personnel), to attend a study group on the problems of urban youth. In September 1964, he left to attend an eight-month Local Government Training Course at the South Devon Technical College in Torquay. Between 1961 and 1966 he was Assistant Administrative Officer and after a year's study in the U.K. he was appointed as Administrative Officer Class B (1967-1972), only the third Solomon Islander to reach that rank. As a Senior Executive Officer Level B from 1965, he completed a variety of government tasks, including Returning Officer at a Yandina bye-election in 1966 and working as a Magistrate.

In mid-1967 Osifelo returned to work at Auki, and in 1972 he was made a Class A Officer, the highest level then achieved by a Solomon Islander, and was appointed District Commissioner of the Eastern District that December. He was Senior Secretary for Social Services in 1973 and Commissioner of Lands and Surveys in 1974. He served as Chairman of the Constitutional Review Committee in 1975 and during the next year was Chairman of the Tribunal for Industrial Disputes. (NS 21 Jan. 1967, 7 May 1967; SND 7 Jan. 1977) 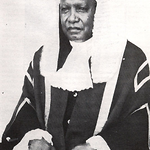