Solomon Suna'one Mamaloni was born in January 1943 at Rumahui village in the Arosi district of Makira Island. He was the son of Jaash Stephanus Suna'one, who from 1960-1962 was Legislative Council member for Makira and was at one time a President of the Makira Council. Mamaloni was educated at the Diocese of Melanesia All Hallows' School at Pawa (q.v.) and for four years (1955-1963) at King George VI High School (q.v.) at Aligegeo on Malaita. He completed his secondary education at Te Aute Maori College in Hawkes Bay in New Zealand (1964-1966). From 1966 to 1968, he was an executive officer in the Solomons civil service, posted to District Administration Central. In 1967 he appeared at Old Lakiti in Tony Hughes play 'Borokua'. Mamaloni worked as Assistant Clerk and then Clerk to the Legislative Council from May 1968 until 1970. (NS 21 May 1967, 28 Feb. 1970) In 1970, as Clerk, he spent three weeks at Papua New Guinea's House of Assembly in Port Moresby, and he was also a delegate to the South Pacific Commission conference in 1970 and represented the Solomons at the Commonwealth Parliamentary Association (CPA) seminars in the U.K., Northern Ireland and the Channel Islands.

Later in 1970, he was elected as member for the Eastern Inner Islands on the Governing Counci (q.v.), taking up the position in 1971. He visited Britain that year to attend the CPA seminar, and visited Mauritius and Seychelles in 1972 to study constitutional development. He became Chairman of the Local Government Committee and of the Eastern Inner Islands Development Committee. Mamaloni toured overseas with the Select Committee on Constitutional Development, and was also a member of the Minimum Wage Board, the Tourist Board and the Education Policy Review Committee. He was re-elected to the Governing Council in 1973 in the West Makira seat. He was a member of the Education and Social Welfare Committee (1970-1971) and the Social Service and Communications and Works Committee (1972), and Chairman of the Local Government Committee (1973).

Mamaloni transferred to the Legislative Assembly (q.v.) in 1974, and on 27 August became the first Chief Minister, after six ballots with six nominees, retaining control of the Home Affairs portfolio for the first three months of his term. He said he intended to transfer more power to Local Councils. As Chief Minister, he visited Papua New Guinea, New Zealand and Japan. He and his Ministers resigned in November 1975, after accusations of corruption over the 'Mint Affair', in which Mamaloni had negotiated a deal to have commemorative coins struck without approval of the government. (Kenilorea 2008, 187) Mamaloni was re-elected, enlarged his Cabinet and led negotiations for a quick timetable for independence. In 1973, he formed the Peoples' Progressive Party, which merged with another party in 1980 to become the People's Alliance Party (PAP). The British assessment of Mamaloni was that he was intelligent and ambitious, but often limited by his complex marital situations. When in 1975 he attended constitutional talks in London, the British assessed him in this way: 'Subject to moods of sulky depression and euphoric bursts of activism. Deeply conscious of his status and inwardly of his lack of experience, and can be easily upset. He is ambitious for the true power of a Prime Minister and the fruits of independent leadership. Not at ease with most members of the Cabinet, and very difficult for expatriates to get close to or relax with, he was conscious of the difficulty of maintaining unity amongst both politicians and island groups'. ('Constitutional Talks in United Kingdom on British Solomon Islands, Pacific Dependent Territories', FCO 32/1260 HPS 1/18 (part A), British National Archives)

Mamaloni emerged as a brilliant orator who used Solomons Pijin to good effect. In June 1976 Peter Kenilorea (q.v.) replaced him as Chief Minister and he resigned from the Legislative Assembly on 1 January 1977. He did not resume his seat until the 1980 election. He retained his interest in politics since at independence he stood for the new position of Speaker of the National Parliament, but Lloyd Maepeza Gina (q.v.) defeated him. (SND 7 Jan. 1977; Melanesian Nius, 27 Jan. 1977; STT 16 Aug. 1978) There were probably several reasons why he resigned, including his complex marital affairs, his business interests which were in decline and required his attention, a feeling of boredom after being Chief Minister, and possibly a fear of sorcery. (Melanesian Nius, 27 Jan. 1977; Chris Chavallier, personal communication, 2011)

Mamaloni was soon back as Leader of the Opposition and then, in 1981, he replaced Kenilorea as Prime Minister. He provided the nation with a clear agenda for the future that stressed decolonisation and decentralisation. He created provincial ministries, and a Provincial Government Act provided greater regional autonomy. His desire for an alliance of Melanesian regional nations came to fruition as the Melanesian Spearhead Group in the Pacific Islands Forum. Mamaloni also created a Central Bank and a national airline. However, his erratic leadership style brought criticism and he lost the next Prime Minister election to Kenilorea.

He remained in the political wings until 1989, when his PAP won twenty-one seats in the election and for the first time there was a one-party government in the thirty-seven-seat Parliament. Mamaloni failed in a bid to make the nation a republic (the second time he had tried this) and financial mismanagement was beginning to emerge. He ran the treasury primarily on revenues from excessive, unsustainable logging, and he ignored World Bank and the Central Bank calls for structural reform. Mamaloni politicised the public service and in 1992 his government introduced a discretionary fund for use by all national politicians which remains in place and controversial today. Faced with calls for his resignation, including by the president of his own political party, and disloyalty from his ministers, Mamaloni declared himself to be independent, sacked five ministers and replaced them from the Opposition. PAP was split and Mamaloni formed the new Group for National Unity and Reconciliation (GNUR) to contest the June 1993 general election. Growing corruption, fraud and mismanagement were obvious, and Mamaloni lost the Prime Ministership to Francis Billy Hilly (q.v.).

Mamaloni was back as Prime Minister from 1994 to 1997, and in 1994 GNUR became the Solomon Islands National Unity, Reconciliation and Progressive Party (SINURP). The logger's welcomed his return. The value of timber had increased, as did the volume of logs exported, to more than three times the sustainable level. Logging provided 20 percent of government revenue and 50 percent of export earnings. Although the national budget balanced, corruption seeped like a cancer through the government and public service. It is fair to date the origins of political and public service corruption in the Solomons today to Mamaloni's years as Prime Minister. Tax exemptions flourished and government bills went unpaid, which prompted Mamaloni to take over as Finance Minister in 1996. Early in 1997 he broke away from SINURP and ruled once more as an independent Prime Minister with a cross-section of the Parliament supporting him in return for Cabinet and other lucrative government posts. Even Mamaloni appeared worried about the impending bankruptcy of his nation. The only bright sign was the Gold Ridge mine in Guadalcanal, which was about to begin production. He banned overseas travel by his ministers, suggested selling passports, and famously sent police to dig for Japanese gold bullion that it was said had been stashed on Tulagi after the war. Mamaloni always disliked overseas travel and seldom attended regional meetings. When he did, results could be surprising: in 1995 he attended CHOGM and voted against the expulsion of Nigeria from the Commonwealth.

Mamaloni lost his Prime Ministership after the August 1997 general election, although he continued to be a force of political destabilisation. Small of stature, with teeth stained from constant betel nut chewing, Mamaloni proudly proclaimed himself a man of the people. He always refused to accept special honours and chose to die in a public ward of Central Hospital in Honiara when kidney problems exacerbated by diabetes and gout finally overwhelmed him on 11 January 2000. He was given a State Funeral at St. Barnabas Cathedral (q.v.), and his body was buried in his home village of Macedonia in western Makira. Mamaloni married, had two children and divorced, then remarried in 1977, and in the end was survived by his third wife, Mary, and their three children. He died poor, having never kept the wealth that passed through his hands. (SS 11-13 Jan. 2000; Moore 2004b, 38-39; NS 15 June 1970, 6 July 1973; SND 9 July 1976; Mamaloni 1992; Larmour 1983a, 1983b) 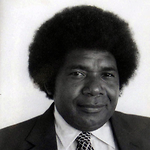