Independence for the British Solomon Islands Protectorate was planned for, at a government level, beginning in the 1960s through various stages of parliamentary change and the development of local government through District Councils and Local Government Councils (q.v.). By the late 1960s, independence was inevitable as part of a post-Second World War world-wide mood for decolonisation, expressed through the United Nations, and as Britain moved all of its colonial territories toward independence. But the actual timing was unclear. Solomon Islanders began earnestly to discuss independence during the 1970s through the media and at the village, church and town levels. When Solomon Mamaloni (q.v.) became the first Chief Minister on 27 August 1974 he was unclear regarding the actual timing of independence, which could have occurred as early as 1976. In 1975, at the time of Papua New Guinea's independence, the Bougainville separatist movement was strong and influenced the Western District, particularly Choiseul and the Shortland Islands, where people discussed leaving the Solomons and joining Bougainville. There was discontent in the Western Solomons over the issue of finances, state government and the future status of the West within a new nation that many thought would be dominated by Malaita due to the size and spread of its population. The Western Breakaway Movement (q.v.) grew in strength in 1977 and 1978 to the degree that a private members bill was introduced in the Legislative Assembly to support the right of the Western Solomons to attain independence. The West refused to celebrate independence on 7 July 1978, but did so a year later. (SND 28 Feb. 1975, 23 May 1975, 26 Aug. 1977)

In May 1975, the plan was for self-government by as early as 1 November but no later than the end of 1975, and independence within twelve to eighteen months. A Constitutional Committee was appointed with the instructions that it should present its recommendations to the Legislative Assembly no later than April 1976. After this, the British Government intended to convene a Constitutional Conference in London. Chief Minister Solomon Mamaloni announced this after talks with Britain's Under Secretary of the Foreign and Commonwealth Office, Joan Lester. (SND 30 May 1975)

Internal self-government was introduced on 2 January 1976. Financial and constitutional talks were held in London during 1977, the result of which was that the Queen would remain as Head of State and there would be no Republic (which had been suggested). A compromise was reached on the status of the Gilbertese and the Chinese, and regarding the nature of land tenure. On 7 July 1978, the British Solomon Island Protectorate became an independent nation within the Commonwealth of Nations with Queen Elizabeth II (q.v.) as the Head of State. 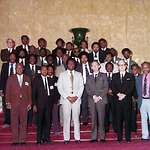