The sixth Diocese of Melanesia junior school for boys was St. Barnabas' at Alangaula (Alangkaula) on Ugi Island, founded in 1936. Alangaula was one of the oldest trading stations in the Solomons, dating back to the 1870s. The school was first run by the Melanesian Brothers with Rev. Charles Fox (q.v.) as its Headmaster, and later as a Diocese of Melanesia mission school, which continued until 1975. After the school closed, the Church retained the Alangaula site and in the late 1970s it was the noviciate of the Society of St. Francis. More recently there have been plans to make it a retreat centre of the diocese of Hanuato'o. (Fox 1958, 236; Terry Brown, personal communication, 26 July 2011) 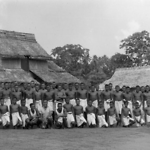