Luke Logomier was born at Malo in the east Fataleka area of Malaita, and enlisted on the recruiting ship Lavinia in 1884 when still in his teens. (Moore 1985, 94-95) He arrived at Mackay in Queensland on 6 September, and remained there until he died in the influenza epidemic, in August 1919. He worked on plantations and farms in the district and attended the Anglican Selwyn Mission, where he became a Christian, and literate. Records suggest that Logomier regularly read his Bible, prayer book, hymnals and newspapers. He would have been one of the most literate Solomon Islanders in the district. He was joined at Mackay by his kinsmen John Kwailiu Fatnowna (q.v.) and Kwailiu's wife Orrani and their children. Kwailiu went to Queensland twice, the second time to the Johnson River at Ingham, where two of his children, Joy and Lucy, were born in 1891 and 1893; the others born at Mackay on Palms plantation. Kwailiu died in 1906 and Orrani remarried, to Logomier. The couple and their family lived on a small hillside farm leased from Farleigh mill until Logomier and Orrani died in 1919.

Logomier may at some point have left Christianity, since there is a record that he was restored to faith in the 1900s. The Selwyn Mission closed in the 1900s soon after its founder Mary Goodwin Robinson left the district and the Anglican Islanders shifted to St. Mary's church at Farleigh. The church was on the old Pioneer-Ashburton plantation on land given to the congregation by a black West Indian family, the Coakleys. The first lay preacher at the Pioneer church was another Malaitan, Alex Sayven, until Logomier took over from him from 1913-1919. Harry Fatnowna's (q.v.) father died when he was only nine, and Logomier taught him most of what he learned about Malaitan customs and Christianity. When Logomier died in 1919, Fatnowna succeeded his stepfather as lay preacher at St Mary's. (Moore 1978) 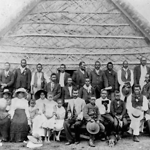