In 1924-1925, Ini Kopuria developed what became the Ira Retasasiu (meaning 'company of brothers'), commonly called the Melanesian Brotherhood (q.v.) or Tasiu. Born in the early 1900s near Maravovo, Guadalcanal, and named after an early Anglo-Saxon Christian king, he was sent to school first at St. Michael's Pamua (q.v.) on Makira in 1913, and later to Norfolk Island. He joined the Native Armed Constabulary, rose to the rank of Sergeant, and was stationed on Guadalcanal. In 1924, following an intense religious experience, he decided to form a brotherhood to take Christianity to the non-Christian villages on Guadalcanal. The influences on him were his knowledge of English orders of monks with the three-fold vow (obedience, poverty and chastity), the short-lived St. Aidan's Brotherhood (1916-1920) which Rev. Charles Fox (q.v.) formed to spread Christianity to inland villages on Makira while Ini was at school there, and the Melanesian Mission (q.v.) itself, which was supportive of indigenous religious orders. Bishop Steward (q.v.) encouraged this indigenous vehicle for spreading Christianity.

Ira Retasasiu was founded on 28 October 1925, in consultation with Bishop Steward, once Ini Kopuria's teacher at Maravovo. Ini took a life vow and gave his land at Tabalia to the Brotherhood, which became their headquarters. He and the first seven brothers began missionary work in the Solomon Islands, which was later extended to other areas of the diocese such as New Britain, the New Hebrides, and to Solomon Islanders in Fiji. The Brotherhood declined in the 1940s and 1950s, by which time most people had accepted Christianity, but there was a revival in the late 1950s when the Brotherhood's focus was altered to Christian revival and, in 1957, their work spread further into Papua New Guinea. Ini also began the Order of Companions of the Brothers, formed from men and women who promised to help the Brothers through prayer and funding, ensuring that the Tasiu had a true indigenous base. 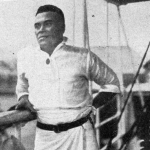