Utupua Island, 48.28 kilometres from Vanikolo Island (q.v.) in Temotu Province, is a high island with a deep harbour in an old crater, and a huge barrier reef that surrounds the island about 3.22 kilometres from shore. In the 1950s about 180 people lived in two villages there. They produced a little copra and depended on diving for trochus and green snail shell for cash incomes. Their houses were oval shaped and mats covered the dirt floors. Linguist Stephen Wurm originally classified the language as non-Austronesian, but more recent analysis by Malcolm Ross, Åshild Næss and Brenda Boerger suggests it is Austronesian and related to those of Vanuatu. ( [accessed 21 Sept. 2011]; Tedder 2008, 107) 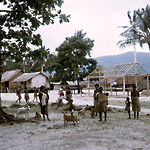