Vanikolo (Vanikoro) Island is one thousand metres high but barely 24.15 kilometres wide, and has a barrier reef some 3.22 kilometres offshore forming a lagoon around the island. Ships from the French La Pérouse expedition (q.v.) were wrecked on Vanikolo in 1778. In the nineteenth century Charles Darwin made a number of observations there about the formation of atolls. In the 1920s a New Zealand-Australian company began logging and milling kauri logs for export, based at Peou. The company was always badly managed and was also hindered by the steep terrain and the high rainfall (averaging 7,500 millimetres per year). The grand plantation-style manager's house was still there in the 1950s. In 1956, Vanikolo had a population of just over one hundred. (Tedder 2008, 105; Allan 1990, pt. 2, 143) See also Vanikoro Kauri Timber Company. 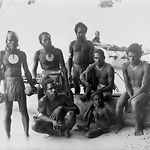 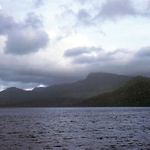 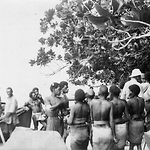