Early nurses in the Protectorate were European and most worked for the various missions or for the government. The first government nurse, Edith Elizabeth Elliot, arrived at Tulagi in 1914. Many Solomon Islands women, particularly sisters of the churches, received informal nursing training. In 1922, the BSIP government began to train native dressers and in 1929 the first Solomon Islander attended the Fiji Medical School. Also in the late 1920s the government began to extend medical services and established small hospitals at district stations, staffed by native dressers. In 1941, the first six Melanesian women began formal training as nurses at the Melanesian Mission's Hospital of the Epiphany at Fauabu, Malaita. After the war a Nurses' School was established there, and between twenty and thirty nurses enrolled each year in four-year courses. The first nurse to be certified was Lingeesu from the New Hebrides, in 1950, and that same year saw the first Solomon Islands nurse, Joyce Ofana. Central Hospital in Honiara trained dressers, with the course expanded in 1953 from eighteen months to three years. Only trainees who could read and write were accepted. By the end of 1954, four dressers had graduated as Medical Assistants. (AR 1953-1954, 29) High Commissioner John Gutch (q.v.) on 13 December 1956 opened a Nurses' Training Centre at Central Hospital to supplement the one at Fauabu. This was renamed the Hospital Training School, and provided three-year courses for nurses and Medical Assistants.

In 1958, the Protectorate introduced the Nurses and Midwives Ordinance, which was amended in 1961 to allow temporary registration of qualified nurses and midwives until a formal meeting of the Nurses and Midwives Board could be arranged. This allowed nurses arriving from overseas to begin work immediately. Nurse training continued at the Fauabu Hospital and also at Munda's Methodist hospital; Fauabu nurses were considered to be at Protectorate Government standard. The SSEC also ran a training course for midwives at Nafinua. (AR 1961-1962, 50; NS Dec. 1956, Jan. 1961; Fox 1958, 248-254; Boutilier 1974, 13; Legislative Council Debates, 31 May 1961)

The Central Hospital School of Nursing continued to train local nurses with aid from UNICEF and the World Health Organisation. In 1970, six women and nine men (one from the New Hebrides) passed the BSIP Nurses and Midwives Board Final Examination. A new nurses' hostel was completed, with accommodation for thirty-two and a flat for the House Mother. In 1974 fifty-seven students were in training, and three students and three registered nurses were in training overseas. (AR 1970, 62, AR 1974, 80) 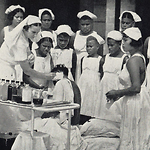