On 31 October 1926, a De Havilland DH50A seaplane belonging to the Royal Australian Air Force and flown by Group-Captain Williams landed at the Shortland Islands, the first aircraft to visit the Protectorate. The plane was conducting an aerial survey of Papua New Guinea, the Solomon Islands, the New Hebrides, New Caledonia, Fiji and Samoa. It then visited Gizo and a few weeks later Tulagi. At each stop the local people were astonished. At Tulagi, the crew decided they needed new engine parts before travelling south, which were shipped in on S.S. Mataram. While the plane was beached at Makambo, locals inspected it thoroughly and watched while the new parts were fitted. The trip south was shelved due to weather and the plane left Tulagi, headed back north, on 23 November 1926. (Knibbs, 1929, 269-70; AR 1926-27, 3; SND 1 Oct. 1976) In 1976, the Solomons issued a set of stamps to commemorate this visit's fiftieth anniversary. The next plane to fly in the Solomons was an old seaplane with an Anzani engine, imported to Tulagi in the 1930s by Stanley G. 'Monty' Masterman (q.v.), Inspector of Native Labour. (G.E.D. Sandars, letter to the editor NS 31 Mar. 1971; Russell 2003, 56)

During the Second World War the Japanese and Americans constructed several airfields, most notably that at Munda in the Western District and those around Honiara. Henderson Airfield, ten kilometres east of Honiara, was originally a small Japanese airfield, which the Americans captured in August 1942 and enlarged. It was named after a U.S. Marine Air Corps Major, Lofton R. Henderson, who had crash-dived his plane onto a Japanese warship in the Battle of Midway the previous June. The strategic Midway victory had opened the way for the campaign to re-take Guadalcanal. The name 'Henderson Airport' was in use as early as November 1942.

There was a smaller airstrip, Fighter II, at Kukum on the eastern edge of Honiara, and further east were Fighter I and a 'crash strip' to where damaged aircraft were diverted on their return from missions, as well as another large bomber strip. (Tedder 2008, 188; Alan Lindley, personal communication, 30 June 2011) Fighter II airfield was used as Honiara's main civilian airfield from 1945 until 1958. Henderson Airfield was reconditioned during 1957 to a standard suitable for DC-3s, and officially opened on 19 May 1958. The first overseas flight, a new Qantas service via Lae, arrived on 9 June 1958. Air navigation aids, including a beacon, were installed in May 1960 in preparation for an extension of air services. Alan Lindley, who arrived in Honiara in 1952, remembers one rather bizarre detail. Because there was no radio communication at Henderson before 1958, the local radio station used to play 'Slow Coach' by Pee Wee King and his Golden West Cowboys on its frequency to enable the planes to home in using their radio directional loop. Problems with access across the Lungga River (q.v.), which lay between Henderson and Honiara, kept use of the airfield patchy until it was reopened on 5 December 1960. Between 1959 and 1969, the Fighter II airfield was brought back into service whenever the Lungga was impassable or Henderson Airfield was being expanded.

In December 1947, Qantas Empire Airways surveyed a possible new route from Australia via New Britain, Guadalcanal and Nauru, extending its 'Bird of Paradise' service. Qantas began 'regular' charter services in June 1949, including the Catalina flying boats of Trans Oceanic Airways, which operated out of Sydney to New Caledonia, New Hebrides and Tulagi. Some flights flew from Sydney to Honiara via Papua New Guinea, then on to Barakoma (a wartime airstrip on Vella Lavella) and the private Levers Pacific Plantations airstrip at Yandina, Russell Islands. (PIM Dec. 1947, June 1948, May 1952; AR 1949-1950, 5, AR 1953-1954, 41; Tedder 2008, 15)

TAA and Fiji Airways began regular services in 1952, both using the same route, at first landing at Honiara's Kukum Fighter II airfield and then at Henderson Airfield after it was upgraded. These airlines used DC-3s (Douglas DC-3 piston-powered aircraft) and Fokker Friendships. Qantas DC-3s initiated an occasional Lae-Honiara service in the early 1950s, and began a weekly service in June 1958, at first using the Kukum Fighter II airfield before moving to the newly rehabilitated Henderson Airfield. (NS 30 Apr. 1958, 31 May 1958)

In October 1961, Captains M. Lewis and P. Bennett arrived in Honiara to investigate beginning an internal air service. In 1962, Captain Laurie Crowley began charter flights to Honiara out of Papua New Guinea using a Piper Aztec plane. Then in late 1963 Crowley purchased a Series 6 de Havilland Dove aircraft which had been a VIP plane for Australia's Woomera Rocket Range, to operate as Crowley Airways Pty., and within the Protectorate as Megapode Airways Ltd. In 1968, Crowley Airways was purchased by Macair Holdings of Papua New Guinea and changed its name to Megapode Airways Ltd. In 1975, the company became Solomon Islands Airways Ltd., trading as Solair, but owned by Macair Holdings. Macair was purchased in 1975 by Talair (Tourist Airlines of Niugini) Pty. Ltd., a company controlled by Dennis Buchanan, and this gave Talair control of Solair. At the same time the Solomon Islands Government bought 49 percent of the airline's shares with a right to purchase the remaining shares within the next five years. This full government takeover was negotiated between 1984 and 1987. The current name, Solomon Airlines Ltd. was adopted when it became fully state-owned in 1987.

Although one legacy of the Second World War was many American and Japanese airfields in the Protectorate, in 1954 there were only three airfields functioning: Kukum, Yandina and Barakoma. In 1955, Barakoma on Vella Lavella was closed and Munda airfield on New Georgia was reopened. In 1963, Auki airfield at Gwaunaru'u, western Malaita, was completed and the government acquired Barakoma and Seghe (south New Georgia) airfields from the Methodist Mission. Also in 1963, Kirakira airfield on Makira was scheduled for construction and Seghe and Mono airfields were rehabilitated. Sites for airfields at Marau and Avuavu were surveyed in mid-1964. The first plane to land at Kirakira was a Megapode Airways Cessna, on 7 November 1964. Avuavu airfield on the Weathercoast of Guadalcanal began to be used in mid-1965, and on 4 March 1966 officially became the ninth airfield in the BSIP and the first built by a Local Council. At Mono Island a wartime strip was brought back into operation in 1965, and Seghe's strip was under repair. The site for Hatangua airfield on Rennell Island was inspected in 1966 and clearing began, and Mono airfield in Western District was equipped with a radio to enable communication with Honiara. Also in 1966, Barakoma airfield at Vella Lavella had been rebuilt and work had begun on the Seghe airfield. (NS 22 Feb. 1966) By the late 1960s, most of the other airfields were slowly brought into service. Gizo Island had no suitable site and so Nusa Tupe Island, 2.4 kilometres off Gizo town was chosen. Lomlon airfield in the Reef Islands was scheduled for construction in 1970, after Santa Cruz airfield was completed. Possibilities for airfields on Choiseul Island and Rennell and Bellona were still being investigated. (NS 15 June 1968, 30 Nov. 1968)

In 1963, Gwaunaru'u airfield at Auki, now lengthened by 152 metres, was established as an alternative airfield if weather conditions prevented aircraft landing at Honiara's Henderson. (NS 15 Sept. 1963) In 1966, Henderson Airfield each week serviced 125 to 250 passengers travelling on Fiji Airways Ltd., TAA and Megapode Airways, and TAA also extended its international service to Munda and Yandina. Barakoma airfield had been reopened and Seghe was almost ready, and an airfield site had been chosen on Rennell Island. The first jet aircraft to visit Honiara, in 1967, was a Falcon Fanjet carrying executives of the International Nickel Company from Canada. There was a sharp increase in air traffic between 1965 (2,911 flights) and 1966 (6,130), due in large measure to the activities of planes conducting the aerogeophysicial survey of the country. (AR 1966, 63; NS 7 May 1966)

The reconstruction of Henderson Airfield in Honiara was completed in 1970: the total length of the runway was now 2,043 metres long and 150 wide. In 1970, the count of airfields open to international traffic included the government airfields at Henderson and at Munda, and a private field operating at Yandina in the Russell Islands. Other government airfields were at Barakoma on Vella Lavella, Gizo (Nusa Tupe Island), Seghe, Gwaunaru'u (Malaita) and Graciosa Bay (Santa Cruz). There were also Local Council airfields at Avuavu and Marau (Guadalcanal), Parasi (Small Malaita), Sterling Island (Treasury Islands) and Rennell Island. (NS 31 Aug. 1970, 15 Feb. 1971; AR 1970, 78, 79, AR 1971, 89) Ghongau airfield on Bellona Island was cleared in 1971 and received its first Solair flight on 4 August. Fera airfield on Isabel was first used on 23 October 1971 and officially opened on 13 February 1972. (NS 31 Mar. 1971, 15 Aug. 1971, 31 Oct. 1971, 15 Feb. 1972)

By the early 1970s, the sole commercial domestic provider of air service was Solomon Islands Airways Ltd., which operated Beechcraft Baron and Britten-Norman Islander aircraft. It used Honiara as its centre of operations, with flights to Munda, Yandina, Gwaunaru'u (Auki), Barakoma, Kirakira, Mono, Seghe, Avuavu, Marau, Parasi, Gizo (Nusa Tupe), Rennell, Graciosa Bay, Choiseul Bay, Balalae, Fera and Bellona. Trans-Australia Airlines (on behalf of Qantas) and Air Pacific Ltd. (formerly Fiji Airways Ltd.) provided overseas services. There were links to the New Hebrides and Fiji three times a week, to Port Moresby once a week and to Kieta and Rabaul via Munda twice a week. In 1973, the Air Transport Licensing Authority allowed the Seventh-day Adventist Mission to operate non-scheduled air services, on routes linking airstrips they had developed to other licensed or government airstrips, for twelve months. The next year, the Mission Aviation Fellowship was given permission to operate a Cessna amphibian aircraft for public, non-scheduled transport on six-month permits to United Church and SSEC bases.

In 1973, Air Pacific inaugurated its first direct flight from Honiara to Brisbane. In 1977, the first Boeing 727 jet landed at Henderson Airfield. Henderson's passenger terminal and facilities were upgraded in 1978 for independence. The Australian Bureau of Meteorology, on behalf of the South Pacific Air Transport Council, operated a number of meteorological reporting stations and a meteorological office in Honiara. (NS 22 June 1973; SND 13 Jan. 1978, 17 Feb. 1978; AR 1971, 89, AR 1974, 100) 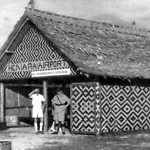 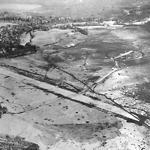 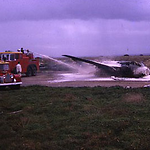 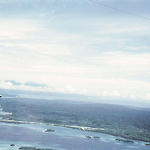 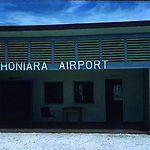 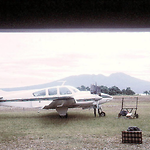 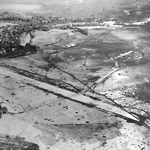