Monilaws Soga was the last of the fighting chiefs of Isabel Island at the time when headhunting raids from New Georgia were causing havoc, and the first chief to give up fighting and adopt Christianity. Soga lived at Pirihandi in the Bugotu area, and was personally responsible for a great deal of the upheaval. In the 1890s it was said that he had earlier destroyed many of the coastal communities, and he had entirely wiped out the people of San George (Maumolu Naunitu) Island. Soga was baptised in 1889 after Bishop John Selwyn (q.v.) nursed him back to health when he was sick in an 1886 influenza epidemic.

Rev. Charles Fox (q.v.) described Soga as a 'tall, lean, powerful man' who always travelled with an armed bodyguard. Bishop Wilson (q.v.) described him as 'a very remarkable man' 'with a face and bearing of one greater than all his neighbours'. It was said he could easily raise an army of two hundred men. After baptism he was as fervent a Christian as he had been a warrior, and he used his power to befriend the New Georgia raiders and his enemies on Isabel. In 1898, he travelled to Nggela with four hundred men in his fleet of war canoes, more interested in performing customary dances than war, but unable to control some of the men who subsequently began looting. Through his great influence peace was achieved, and he was generally lauded as the unifier of the Isabel tribes in the 1890s. Because of this, the Melanesian Mission (q.v.) was able to spread Christianity through the island. The Mission created a post of Paramount Chief of Isabel, and Soga was the first to fill it. In later life Soga lived at Sepi village, and when he died in 1898 the cross on his grave bore the inscription Ke vonungia na dotho (He was filled with love). (Fox 1958, 31, 196, 198; Montgomery 1904 [1896], ch. 21; Wilson 1932, 228-231; SCL Dec. 1896, supplement; SCL 16 Jan. 1899, 13; Ellison and Anika Soga, 'Soga's Last Journey and Death', SCL Dec. 1900, 91-95) 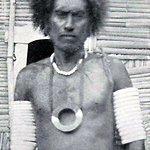