Silas Eto (Holy Mama) was born circa 1905, the elder son of chief Leti in the Kalikolo district at the northern tip of New Georgia Island. Eto was expected to take over his father's position. The Methodist Mission (q.v.) had arrived in the area in 1902, but it was another ten years before the mission reached Kalikolo. Leti and his people moved down from the mountains to Kolumbaghea on the coast to be part of the mission. Eto was baptised in 1918 and was the first Kalikolo student to be sent to the mission station. In 1927, he was trained as a pastor and was posted to Kokeqolo in southwest New Georgia. He became conscious of the inequalities of British colonial life, which contradicted the teaching of Christianity. Eto believed that the schooling offered by the Methodist Teacher Training College was the key to Islanders acquiring power and prestige, and he valued the plantation work skills inculcated by the mission. He began extensive periods of prayer, interspersed with plantation work. Through prayer, he had mystical experiences during which it is said that the Holy Spirit entered his body and gave him confidence to take over from his father. After five years at Kokeqolo he returned to Kolumbaghea, and there manifestations of the Holy Spirit, takamoe, occurred in the congregation during his sermons. These manifestations spread through other areas of New Georgia, and Eto began to have differences with the Methodist Mission. After an angel appeared to him in a vision and instructed him to lead the people of New Georgia, in 1957 he began construction of 'Paradise', an entirely new village, as a holy place. Completed in 1960, Paradise was unique for its beauty and its ornate church-the largest leaf-structure in the Protectorate-and because they developed large plantations in the area that were operated by communal work and grew cocoa, rice and coconuts as cash crops.

Eto's movement increased rapidly after the Second World War and became feared by the Methodist Mission, but when Eto was arrested for sedition in the early 1950s he was released only because Methodist missionary John Goldie (q.v.) threatened legal action on his behalf. His reputation grew as a charismatic leader, and in 1960, after growing disagreements with the leaders of the Methodist Mission, Eto founded the Christian Fellowship Church (CFC) (q.v.). The Methodists tried to have Eto arrested and labelled his Church the abode of evil spirits, but the CFC prospered. In 1964 he broke away from the Methodist Church permanently and registered his new Church, and he adopted the name 'Holy Mama' after a miraculous event in which Eto's spirit was seen with the spirit of God. Mama can mean 'father' or 'mother' or 'God'. The CFC constitution was established in 1965. The CFC continued to grow, having adopted the circuit administrative structure and system of ministers and pastors of the Methodists. Although initially motivated by opposition to European colonialism, the CFC represented an attempt to use the logic and organisational practices of Christianity and the colonial system to create a new, superior life for the people of New Georgia.

When Eto died in 1984 his spiritual authority passed to his son, Ikan Rove, while another son, J. D. Tausinga, went into national politics. Today, the Christian Fellowship Church has over fifteen thousand followers, who live in more than forty villages, and is the sixth largest denomination in the Solomon Islands. (PIM Nov. 1980, 25; Gary Bartlett, Richard H. Chester, and Ezau Tuza, letters to editor, PIM, Jan. 1979, 8-9; Harwood 1971; Tuza 1977; Ishimori 2007) 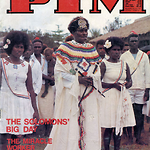 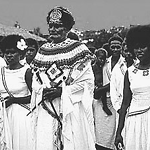