Walkabaoti long Saenataone, the best-known song from the Solomon Islands, was written in the 1960s by Edwin Sitori. The song is now part of the popular cultures of Papua New Guinea and Vanuatu.

Solomon Dakei and his group 'The Solomon Islanders' made the first recording of the song, along with 'Auki Love Song', at the Solomon Islands Broadcasting Corporation studio in January 1959. It was distributed as a 45 r.p.m. record by the South Pacific Commission. The BBC General Overseas Service gave the song world-wide coverage by playing it on 19 and 20 March 1959. (NS Jan. 1959, Feb. 1959) In Solomons Pijin, it describes aimlessly walking about in Honiara's Chinatown, and the trials of living in the foreign urban setting, separated from home and loved ones. It struck a chord of recognition with many rural Pacific peoples faced with the alienation of life in town. It was later recorded by Viking Records.

Think back to you,
A long time since leaving home,
More than two years haven't seen you,
Which is why I don't like you,
Man stupid, stupid head to lose money.

Doesn't matter if I die in Honiara,
What's lost, is lost a long time with you,
But if you think of me,
You can wait for two year more,
Let my skin get a little lighter here. 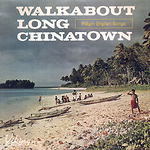