The Treasury Islands are a small group close to the south of the Shortland Islands. The largest island is Mono, next to Stirling Island. There is a deepwater port between the two islands called Blanche Bay.

Lieutenant John Shortland named the islands in 1788. In 1886, the group was included in German New Guinea (q.v.) except for Mono Island, which the British claimed as a naval coaling base. In the second half of the nineteenth century Mono people under bigman Bagara attacked the nearby Shortland Islands. Many Shortlands people were killed, some fled to Buin in southern Bougainville and the small remainder of the population married into the Mono conquerors group. The Mono people wanted to control the shell valuable trade and establish closer relation with the European whalers and turtle shell traders in the area. In 1899, the Treasury Islands were included in the British Solomon Islands Protectorate. They were administered as part of Western District and are now part of Western Province.

The Japanese overran the Treasury Islands in 1942 and they became one of the strategic points for the Allied counter-attack when, in October 1943, the New Zealand 8th Infantry Brigade Group landed there supported by the U.S. Marine Amphibious Corps. Civilian administration resumed on 1 November 1943. The Americans built an airstrip on the flatter Stirling Island, which is still in use. (Allan 1989, pt. 1, 45; http://en.wikipedia.org/wiki/Battle_of_the_Treasury_Islands, http://en.wikipedia.org/wiki/Treasury_Islands [accessed 15 June 2011]) 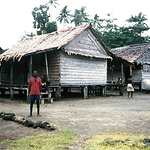