In November 1884, the German Government proclaimed northeast New Guinea to be a Schutzgebiet, an overseas mercantile territory. The Neu Guinea Kompagnie was empowered to govern the area. The mainland area was named 'Kaiser Wilhelmsland' and the New Britain Archipelago was renamed the 'Bismarck Archipelago'. At the same time, the British proclaimed the British New Guinea Protectorate (later colony) over the area that became the Australian Territory of Papua after 1906. The British New Guinea boundary began at the Dutch border at the 141st meridian east, in the middle of New Guinea, and proceeded to East Cape, including all islands east to Kosman Island. The D'Entrecasteaux Archipelago was not included initially. In December 1884, the British Protectorate was extended to secure territory between East Cape and the Huon Gulf, the Louisiade and Woodlark Groups, and Umboi Island in Vitiaz Strait. There was also an attempt by the British to claim the Rai coast near modern Madang, which the Germans protested. Jockeying for territory continued until April 1885, when an equitable division was agreed to. The 1884 eastern boundary of German New Guinea ran between New Ireland and New Britain and Buka and Bougainville. In April 1886, the final section of German New Guinea was added, extending the border to include Buka, Bougainville, the Shortland Islands, Choiseul, Isabel and Ontong Java. The Mono Islands in the Treasury Group were excluded because the British claimed it as a naval coaling base.

The remainder of the Solomon Islands was recognised as under British influence through the Western Pacific High Commission, although no Protectorate was proclaimed until 1893. In 1899, as part of much wider territorial rearrangements, the German New Guinea border was pushed back to between Bougainville and the Shortland and Treasury Islands, today's boundary between the Solomon Islands and Papua New Guinea. The final area of contention was the Tasman Group. It had been thought that this group of islands, fifty-three kilometres north of Ontong Java, were included in the transfer, but in fact they were still within German territory. The proclamation over the Tasman Group was revoked in 1900, and in 1906 Woodford visited there to formally withdraw the British presence.

The Germans did little to govern their islands south of Bougainville, although they did erect markers on each of the main islands, and took indentured labourers away to Samoa. For instance, a German ship visited Vialangono on Choiseul Island and marked trees. On Rapita Island on the Kia peninsula, Isabel Island, in the 1950s there was still a stone pyramid built of brick which local people said had once contained a message in a bottle. A similar marker at Maranatabu in southeast Isabel had been dismantled by the Anglican missionary Dr Henry Welchman (q.v.). 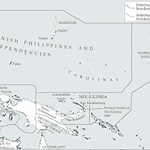