Beginning in the early 1870s, Solomon Islanders took part in the labour trade to and from Queensland, Australia and Fiji, and smaller numbers worked in Samoa and New Caledonia. (Moore, Leckie, and Munro 1990; Moore 1985; Scarr 1967b; Corris 1973; Saunders 1982; Graves 1993; Mercer 1995; Banivanua-Mar 2007; Takeuchi 2009; Shineberg 1999; Price and Baker 1976; Siegal 1985) The largest numbers went to Queensland. (Moore 1978-1979, 1978a, 1979, 1985, 1991, 1996, 2000a, 2000b, 2001a, 2004-2005; Moore and Mercer 1978, 1993) Labourers were employed mainly on plantations and farms. Usually this was to process copra and sugarcane, although some also worked in maritime industries, sheep and cattle industries and even in domestic service. Overwhelmingly the labourers were men in their late teens into their mid-thirties; only about 5 percent were women. The beginnings of this indentured labour trade came after the abolition of slavery as a form of forced labour, and it was formally based on contracts. However, particularly in the 1870s and 1880s, the participants were illiterate and could never have understood the contracts. Furthermore, master and servant contracts were designed to favour the employers, and not to achieve equality of employment conditions for the labourers. Some of the early recruiting practices involved kidnapping and other illegalities and they were often said to resemble slavery. The death rates in the trade were also high, though mostly this was because recruits lacked immunity to the many new diseases to which they were exposed on European-operated plantations. (Shlomowitz 1989a, 1989c, 1990; McDonald and Shlomowitz 1988; Moore 1985, 218-273; Newbury 1974; Rannie 1912; Romilly 1886; Wawn [1893] 1973; Scarr 1967; Shineberg 1967, 1995, 1999)

Even at its best, the indentured labour trade was 'cultural kidnapping', in which Europeans took cultural advantage of the Solomon Islands. (Moore 1984, xi) This is not to say that Solomon Islanders over the decades between 1870 and 1911 did not come to understand what was involved, as sons followed fathers and uncles to far away plantations. Nor was the exploitation only one-sided since many passage masters and bigmen participated in arranging the labour supply. The labourers were not all 'kidnapped', and many enlisted more than once, some three times, perhaps once to Fiji and twice to Queensland. There were 24,865 contracts and probably around sixteen thousand individuals involved. Most of the contracts were for three years and these could be extended for various periods. In Queensland labourers worked in maritime endeavours, pastoral industries and the sugar industry, and Fiji labourers worked in the copra and sugar industries. (Shlomowitz 1979a, 1979b, 1981, 1982a, 1982b, 1984, 1985a, 1985b, 1986b, 1986c, 1987a, 1987b, 1987c, 1989a, 1989b, 1989c, 1990, 1992, 1993a, 1993b, 1994-1995, 1996; Shlomowitz and Bedford 1988)

Mortality rates were high, but those who participated in this circular labour migration process and survived were immensely changed. (Shlomowitz 1986a, 1987b, 1987c, 1989a, 1989c, 1990) The first labour recruits began to return to the Solomons in the mid-1870s, but some stayed away for many years. Others chose to stay in Australia and were forced to return in the 1900s when Australia legislated for a White Australia Policy. One such person was Joe Lovë, Headman of the Vololo area of Guadalcanal in the 1930s, who had been bartered by his chief for a Snider rifle when he was about twelve years old, and worked in Queensland for many years. He petitioned to be able to remain in Australia in the 1900s but was deported, returning home only to find his parents dead and himself forgotten. He gradually reincorporated himself into his descent group. (Horton 1965, 136-138) Others returned from Fiji in the 1910s. There are still significant communities of Solomon Islands descendants in Australia (see Australian Solomon Islanders), mainly in Queensland and northern New South Wales, and also in Fiji (see Fiji Solomon Islanders (Solomoni)), with a smaller group resident in Samoa. Those who returned from overseas service had a significant influence on the development of the Solomon Islands and helped to introduce Christianity and literacy. They were often middlemen at the forefront of negotiations with missions, plantations and the government. (Corris 1973a; Moore 2000c) 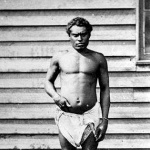 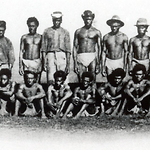