Early in 1946, the Protectorate Government took over Levers Ilu plantation in eastern Guadalcanal as an experimental farm. During the American occupation, two thousand acres had been cleared and cultivated with food crops. The plan was to turn much of this land over to rice production, and also to use Ilu as a training site to develop an indigenous copra industry, using Ceylon-type driers. In April 1949, the Protectorate received a grant of £31,259 to establish a Guadalcanal Experimental Farm, with the aims of producing cash crops and livestock, and improving indigenous agriculture and developing the Guadalcanal Plains (q.v.) through mechanical cultivation. Crops included rice, root crops, groundnuts and vegetables, supplemented by poultry and cattle. Ilu Farm was sold to Kenneth Dalrymple Hay (q.v.) in 1955 and continued to produce vegetables and poultry for the Honiara Market. (Bathgate 1977, 1) By 1966 chickens were being produced on the farm, supplying six hundred eggs per day. (AR 1949-1950, 6; NS June 1966; PIM Dec. 1946, June 1966) 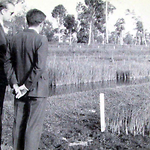