The luxuriant marine resources of the Solomon Islands are one of its most beautiful natural features. The hundreds of islands and thousands of fringing reefs and lagoons are vital both to domestic food supplies and export income. Today Solomon Islanders are estimated to consume at least thirteen thousand tons each year as subsistence fishers. Fish constituted a large part of the traditional diet for many, and they remain an important part in the diet for most people, particularly for those who live on the coast. Inland peoples have always bartered garden produce for fish, and they also catch eels and other freshwater fish in inland rivers.

A British grant was received in 1960 to both develop fisheries and improve the supply of fish for local consumption. It was intended to teach techniques of deep-sea fishing to the owners of locally built powered cutter boats, improve coastal fishing, and instruct fishermen in fish preservation, storage and marketing. (Van Pel 1956; NS July 1960) The first organised commercial fishing in the Protectorate was a small co-operative based in Honiara which in 1960 caught 3 tons of fish. Also, several individuals in the Eastern Solomons produced 1,000 pounds of smoke-dried fish. Trochus and green snail shell was exported in small quantities. The species Tilapia mossambica was introduced by the Department of Agriculture and distributed widely, particularly to missions and schools, and Lake Tengano on Rennell Island was stocked with them. (AR 1959-1960, 30) In 1962, the government fishing vessel San
Juanita began to be used for commercial fishing using nets and long-lines, and pole fishing for tuna began in early 1963. Crayfish from Santa Ana were collected in underwater cages, then frozen on the ship and brought to Honiara for sale. (NS 15 Dec. 1962) In 1963, the Fisheries Section of the Department of Agriculture purchased refrigeration equipment for the Honiara fish market and began to supply ice to fishing boats. The first Solomons fishing boat converted to pack its catch in ice was ready in 1966. (AR 1963-1964, 29; NS 21 May 1966)

Of the world's tuna catch, 50 percent comes from the South Pacific, and tuna stocks are among the Solomon Islands most important assets. Sustainable development of the fish reserve and regional fishing agreements are crucial for future development. The Solomons commercial tuna fishery, since it began with a 4,711 ton catch in 1971, has become the largest domestic tuna industry in the southwest Pacific. During the 1970s, after the declaration of the United Nations Convention on the Law of the Sea, Pacific nations laid claim to around thirty million square kilometres of the Pacific Ocean as part of their two hundred-mile Exclusive Economic Zones (EEZ); this gave the Solomon Islands a 1.3 million square kilometre zone. The Forum Fisheries Agency (FFA) (q.v.), established by the South Pacific Forum in 1979, has sixteen member nations and a Secretariat based in Honiara, which provides technical advisory services.

Leaving aside nineteenth-century whaling (q.v.) around the archipelago before the Protectorate was established, the modern commercial fishing industry really began with negotiations in 1971-1972. In 1973, the government and a Japanese company began a joint fishing venture, Solomon Taiyo Ltd., with a cannery at Tulagi in the Nggela Islands. The Japanese wanted skipjack and yellow fin tuna to freeze for export to canneries in American Samoa, Puerto Rico and the American mainland, and for canning for the local market. They were also seeking fish for smoking, a style (arabushi) valued highly by the Japanese consumers. Exclusive fishing rights were negotiated over the fish-rich 'Slot' (q.v.) between the two chains of islands. Exports began in 1974. The cannery produced seventy-five thousand cases of canned skipjack for the European market, while the local market consumed 25 tons of frozen skipjack and 10,600 cases of tinned fish. An arabushi smoking plant began operating in May 1974 and produced 68 tons of smoked fillets. Solomon Taiyo Ltd. employed 136 Solomon Islanders at sea and 306 on-shore. The new fishing industry also provided a market for frozen fish at Honiara Market, with 250 tons sold in 1974. (AR 1974, 51; Smith 2011, 59-69)

It was then proposed to build a second cannery at Noro on New Georgia Island in Western Province, which had been used as a second fishing port since the mid-1970s. Development proceeded and Noro completely replaced Tulagi as the base for the Solomon Taiyo cannery. Initially the joint venture was split 25/75, but this was altered gradually in the late 1970s and early 1980s, until 51 percent became owned by the national government and 49 percent by Maruha Corporation (formerly Taiyo Gyogyo) of Japan, which managed the operation. Originally around twenty catcher boats operated out of Noro, owned by Okinawan fishers and 'chartered' to the company. They used the pole-and-line method and both Solomon Islanders and Okinawan fishermen. Solomon Tayio purchased the aging boats over several years in the mid-1990s, and eventually the Okinawans formed a minority of the crews and some boats were fully localised.

Starting in 1978, another joint venture built small bait-catching and pole-and-line tuna-fishing boats at Sasape in the Nggela Islands, but the more expensive and bigger imported purse seine vessels brought in larger catches. The tuna was exported either smoked or frozen, and some was canned for the domestic market. The government intended that eventually Solomon Taiyo Ltd. would be fully locally owned and it established the National Fisheries Development Ltd. (NDF) as a joint venture with the company for this purpose. The two companies operated several pole-and-line, long-lining and purse seiners together for several years before the partnership ended. (Moore 2004b, 79-80; Barclay 2000, 2005, 2007; Barclay and Wakabauashi 2000) 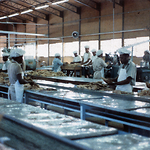 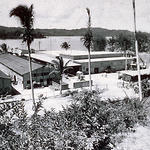