Takki of Wango was one of the most important Makiran leaders in the late nineteenth century. Although he never became a Christian, he was a friend of the Melanesian Mission (q.v.) and his only son, Robert Jackson, was baptised. Robert was literate and taught in the mission, but returned to his ancestral religion in the 1870s, before re-joining the mission in 1880. Robert married Suboara, from another leading family, and was killed by a shark in 1882. Takki survived him and was an old man when Bishop Montgomery visited the island in 1892. (Montgomery 1904 [1896], ch. 16) 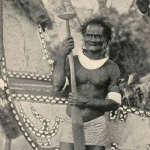