Ellison Leslie Pogo was born in 1947 and educated at Bishop Patteson Theological College, after which he attended St. John's College in Auckland. He was ordained a deacon and a priest in 1979. After an early posting at Anderson's Bay in Dunedin, New Zealand, he became Bishop of Ysabel for thirteen years until in 1994 he was appointed Archbishop of Melanesia, succeeding Amos Stanley Waiaru (q.v.). He also remained Bishop of Central Melanesia. In 2006 Pogo became the Senior Primate of the Anglican Community, a position he held until his retirement. He was also Chairman of the design group for the 2008 Lambeth Conference, and Chairman of the Pacific Theological College. In October 2000 Queen Elizabeth knighted him, the only Anglican Primate to have received this honour. The Archbishop of Canterbury awarded him the Medal of the Order of Saint Augustine in October 2008; he was the only person to receive this award in Australasia and the Pacific. The President of the Republic of Vanuatu bestowed on him the Badge of Honour for his services to the Anglican Church in Melanesia. Sir Ellison announced his retirement in November 2008. Married to Roslyn and with three children, Archbishop Pogo died in May 2013. (http://en.wikipedia.org/wiki/Ellison_Pogo; http://en.wikipedia.org/wiki/Archbishop_of_Melanesia [accessed 14 July 2011]; Solomon Times online, 16 Nov. 2008) 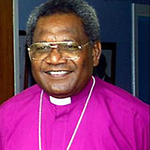