Reginald Chapman Nicholson, clergyman and missionary, was born on 21 October 1882 at Glenelg in South Australia, the son of Robert Nicholson and Dorothy Jane (née Neasom). Nicholson became a candidate for the Methodist ministry in 1905 and after two years at Queen's College, University of Melbourne, augmented by some extra first-aid training, he went to Vella Lavella in 1906 as the area's first missionary. He was accompanied by his sister, who kept house for him and, at one stage, took over when he became ill. At that time the Protectorate Government was still trying to stop headhunting in the area. His first advance came after he cured a boy, Daniel Bula (q.v.), of a serious eye infection. Bula became Nicholson's first convert to Christianity, and then his cook, medical assistant, interpreter and eventually co-worker. Nicholson in 1924 would publish The Son of a Savage: The Story of Daniel Bula. 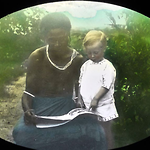 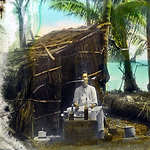