Ishmael Idumaoma Itea was born about 1904, son of Lotaa and Alide of Rakwane in east Fataleka, inland from Fakanakafo Bay, Malaita. His family were early converts to the South Sea Evangelical Mission in east Fataleka. One of the SSEC's early bases was Ngongosila islet in Kwara'ae, just south of Fakanakafo Bay. The SSEC sent their first missionaries to east Fataleka in 1934. Lotaa, Alide and twenty-year-old Itea were converted. Lotaa also worked briefly for the administration, when from 1925 to 1927 he was Assistant Headman in Fataleka, but he resigned that position after District Officer William Bell was killed.

In 1934, Itea went to work as a labourer on Levers' plantation at Tenaru on Guadalcanal for two years and then returned home. In 1938, his parents returned to Fataleka, to Rongofonga for more missionary work, and in August that year Itea joined the Police Force at Tulagi, where he remained until the Second World War (q.v.) reached the Solomons. Lotaa and Alide both died in October 1942. That year, Itea joined the British Solomon Islands Defence Force to assist the Allies, and from February to August 1943 he served as part of the guard for High Commissioner Marchant (q.v.) in the west Malaitan mountains behind Auki after the Japanese invasion forced relocation of BSIP headquarters to there. 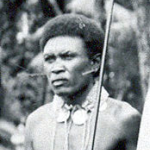