Born on 22 September 1934 in Namoi village, Lautoka, Timothy Bavadra, a medical practitioner from Fiji, was seconded from the Fiji Medical Service to work in the Solomon Islands, where he spent three years based at Auki, Malaita from 1966 to 1968. He was sponsored to undertake a Diploma in Public Health at Otago University, Dunedin, New Zealand during 1969, after which he was appointed as District Medical Officer, Western District. In 1987 he became Prime Minister of Fiji for just one month until he was removed in a coup. He died on 3 November 1989. (NS 28 Feb. 1970) 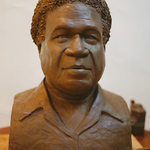