When C. M. Woodford arrived as the first Resident Commissioner in 1896 there was no postal service. Letters and parcels were given to passengers of ships to post at other ports. In 1906, Woodford is said to have had a hand stamp made: 'BRITISH SOLOMON ISLANDS PAID'. This was applied to letters in Tulagi along with a Tulagi postmark. Woodford then forwarded the letters to Sydney in a mailbag along with his personal cheque to cover the cost. The first BSIP postage stamps were printed through a lithographic process in Sydney and issued in 1907. After eighteen months they were replaced by a series of similar design printed in London from line-engraved plates. The General Post Office was located in Honiara and other post offices operated at Gizo, Munda, Yandina, Auki, Kirakira and Graciosa Bay. Mail distribution to outlying areas was arranged through fifty postal agencies. The BSIP developed a colourful array of stamps. The earliest ones used war canoe designs combined with the King's head, or just the King's head. (http://www.ro-klinger.de/tulagi/ [accessed 26 June 2011]; The Postage Stamp Oct. 1910; NS 15 Apr. 1968; AR 1974, 102) The philatelic section of the General Post Office in Honiara sends stamps to philatelists throughout the world, handling an ever-increasing number of direct orders for both mint and cancelled-to-order stamps. (AR 1966, 64) 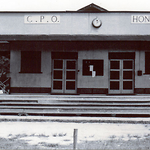 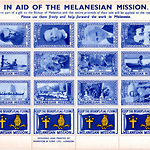