The first permanent photographic image was produced in Europe in 1826 or 1827. There may have been photographs taken by the scientists or crew of visiting ships between 1830s and the 1870s, but none are known. More likely is that the first Solomon Islanders to be photographed were in Australia or New Zealand or on Norfolk Island. There is an 1865 photograph of Bishop John Patteson with a group of Melanesian students at St. Andrew's College at Kohimarama, Auckland, which may include Solomon Islanders. In 1871, Rev. Robert Codrington had a camera on Norfolk Island: he took one picture of Patteson which includes George Sarawia (from Banks Islands) and an unidentified young Melanesian who could well be a Solomon Islander. Presumably, Codrington also took other photographs which probably included Solomon Islands students. The first identifiable photographic image of Solomon Islanders is of a group of indentured labourers on Francis Amhurst's Foulden plantation at Mackay, Queensland in 1875. His cousin, Lord William Amherst of Hackney, used it as a frontispiece in his The Discovery of the Solomon Islands. (1967 [1901], co-authored by Basil Thomson) There are other 1860s and 1870s photographs from Queensland sugar plantations which might include Solomon Islanders. (Ross 1983; Terry Brown, personal communication, 21 Sept. 2011)

The first photographs known to have been taken in the Solomons are by Charles Woodford, who shot them while he conducted study there as a naturalist during 1886-1888. At around this time cameras were also used on labour trade vessels. (Woodford 1890a; Rannie 1912, 206-217) In 1892, Dr Welchman, Rev. A. Brittain and Bishop H. H. Montgomery used equipment loaned by Tasmanian photographer J. W. Beattie to take a series of photos of Melanesian Mission activities, some of which are in the Solomons. Beattie in 1906 toured the Solomon Islands on the Anglican ship Southern Cross and created an extensive set of photographs. He published more than four hundred from the Protectorate. (Beattie 1909)

Tulagi was first photographed in 1897 but was not heavily represented in the photographic record of Solomon Islands since Tulagi had no resident commercial photographer. The images that remain were mostly taken by one or two long-term residents and by visitors. Photographers found the local people, housing, material culture and artefacts far more exotic and photogenic than the nondescript colonial town. A great many of the existing images are of plantations and mission stations scattered around the archipelago.

Thomas Edge-Partington, a District Officer from 1904 to 1915, took many photographs while based at Gizo and then Auki. Dr Northcote Deck, a SSEM missionary in the Solomons onward from 1909, and his brother Norman both took photographs of high quality, and other missionaries and traders were also taking photographs. (Woodford 1890a; Montgomery 1904) Other photos were taken by visiting journalists like Thomas McMahon and, in the 1920s, by South African-born American-based Merle La Voy. (Quanchi 2010a) Like many other visitors, photojournalist McMahon took many photographs when he visited in 1918 and then published eighty-three of them worldwide in magazines and illustrated newspapers over the next five years. Early in the twentieth century photographs had appeared worldwide in illustrated encyclopaedia, official reports, magazines and, after 1898, as postcards. Collector Max Shekelton has 1,500 individual pre-Second World War postcards from the Solomon Islands in his collection. (Quanchi 1994, 1995, 1997, 2004, 2010a, 2010b)

Commercial houses such as Burns Philp & Co. collected a few photographs. In the 1930s Solomon Islands photographs began to appear in Pacific Islands Monthly, the Australian travel magazine Walkabout and National Geographic and in Australian illustrated weekly newspapers such as the Queenslander and the Sydney Mail. They are also found in Burns Philp's tourist and trade magazines such as the B. P. Magazine. (Perkins and Quanchi 2009)

The box camera had been introduced in the 1890s and its simple controls and roll film made basic photography easy. As cameras became more portable and cheaper, tourists and residents all took photographs of the exotic tropical images of the islands. Visiting anthropologists started to take photographs as an essential fieldwork tool and the Second World War generated huge numbers of photographs, both official and unofficial. Aerial photography also began during the war.

After the war, cameras became common and the Bakelite Brownie 127 of the 1950s and 1960s, and later digital cameras, enabled more people to make their own images. 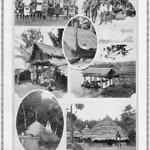 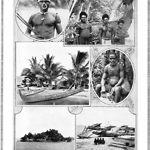 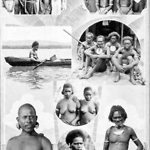