A new government vessel, the RCS Melanesian, was built by the Hong Kong and Whampoa Dock Company and launched in Kowloon on 10 July 1956. It arrived in the Protectorate that December. The ship was thirty-six metres long, had a 7.9 metre beam and a maximum speed of 9.5 knots. She had space for seven first-class passengers, seventy-five deck passengers and a crew of eighteen. With its 241 gross tons, the Melanesian could also carry 100 tons of deadweight cargo, or six hundred drums of fuel, or 70 tons of copra. The ship left Sulufou in Malaita's Lau Lagoon on 9 July and was last heard from on 10 July 1958, after which she disappeared with sixty-four people aboard. The ship was thought to have sunk near Sikaiana in 1,200 fathoms of water since its last message was at 9:00 a.m. on 10 July, twenty-five miles west of Sikaiana. An extensive sea and air search failed to locate any survivors. Limited wreckage began washing up on the east Malaita coast on 18 July, but only one partial body was ever found, that of Reef Islands boatswain David Daewo, who washed ashore at Maanawai. The other sixty-three passengers are all presumed to have been lost with the ship. A subsequent enquiry suggested the ship sank quickly, but an extensive investigation never released a conclusive report. Some thought the ship had been attacked by or hit a submarine and a loud noise out at sea was heard in south Malaita at 4 p.m. on 12 July which some thought related to the Melanesian. There were also earthquakes recorded on 13 July, precursors of which might have affected the ship. Although no explanation for the tragedy was ever established, the Commission of Inquiry after the event ruled out sinking by attack from or collision with a submarine, a mine, another ship or an explosion. The most likely reason was a badly manufactured hull which split in two when hit by rogue waves, causing the ship to sink immediately with total loss of life.

The loss of the Melanesian along with another loss on 14 July, of the Medical Department's sixty-six foot Betua on a reef near Maanawai Harbour, left the Protectorate dangerously lacking in inter-island shipping. A temporary replacement was borrowed from the Royal Navy base in Hong Kong. 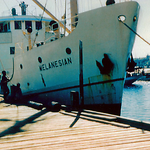 Title
R.C.S. Melanesian served the Solomons from 1956 to 1958 when it disappeared without trace
Type
Image
Date
1958
Source
Alan Lindley