Ketch-rigged and thirty-three tons, the Lahloo was the first substantial government vessel. The ship arrived from Sydney in 1899 and was of inestimable value, travelling thousands of kilometres each year on government work. Before that, government officials had to beg rides on naval or trading vessels or use whaleboats. (AR 1899-1900, 14) 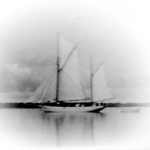