After the Second World War, Solomon Islanders were unwilling to seek civilian employment. When British control resumed fully in 1945, the decisions had been made that the indenture system must be phased out and taxation should not be used to force men to work on plantations. Total labour recruiting was limited to 5 percent of the total population, which would be about 3,500 men, and higher living standards for labour were prescribed. (Campbell 2007; Bennett 1987, 150-66, 186, 205-206, 220)

Reconstruction of copra plantations was also slow and most indigenous workers were on short-term contracts. Wages were increased to £2 per month, when the prewar wage had been ten shillings, rations were improved, and labour recruiting was to be conducted by the government. The average hours of work was set at forty-five per week for all workers, and the Labour Regulation 1947 provided for a maximum of fifty hours per week. In 1949 there were seven rates of pay:

Mariners: £3.10s. 0d. to £30 per month, plus free medical care and, in cases of seagoing appointments, rations to the approximate value of £3 per month;

Unskilled labourers: £2 per month, plus rations to the value of £3, free accommodation, clothing and medical care;

Domestic servants: £1 to £5 per month, plus rations to the value of £3, free accommodation, clothing and medical care;

By 1948, the position had improved, although Solomon Islanders preferred government reconstruction work to plantation work, which slowed rehabilitation of the copra industry. The numbers of workers continued to rise: to 4,213 in 1953 and 4,340 at the end of 1954. In 1956, there were 6,000 employed: 1,269 by the government, 2,500 by plantations and 2,240 in other occupations. (AR 1955-1956, 12) Most workers were engaged on short-term contracts, many plantation workers were still under a form of indenture, and no females were engaged except casually as household staff or hospital nurses. Highest paid in 1956 were the Assistant Medical Practitioners, at £324 to £732 per annum with cost of living allowances in some cases. Middle-range employees such as clerks, artisans, agricultural field assistants, medical dressers, sanitary inspectors, wireless operators and so forth received £114 to £306 per annum. Domestic servants were paid £2 to £3 per month, plus rations, free accommodation, clothing and medical care. Without free rations their wages were between £5 and £12 per month. Unskilled workers received £2 to £2 10s. 0d. per month plus rations and free accommodation, clothing and medical care. Wages for the upper level workers had increased considerably over the previous two years, while those for domestic and unskilled workers remained the same. Wages were mainly paid in cash and the issue of rations had practically ceased by 1960, except for waterside workers and ship's crews. (AR 1953-1954, 11, AR 1955-1956, 12, AR 1959-1960, 9)

Although the maximum length of contract was fixed at one year, many plantations offered an increase in wages to labourers who signed on for a further term, and workers accompanied by their families could sign on for two years. In 1960, of the three thousand workers in the Protectorate, only two hundred had families with them. Labour had been in short supply in Honiara in the 1940s and early 1950s, but by 1960 there was enough of a resident supply that building contractors, the Public Works Department and other employers had ceased outside recruiting, although the Ports Authority still sought stevedores elsewhere. (AR 1959-1960, 8; Frazer 1985; Friesen 1986)

The Labour Department was established in January 1959 and a Commissioner of Labour was appointed that October. The Labour Ordinance 1960 came into force on 1 June 1960 and the previous Labour Regulation (Cap. 24) was repealed. District Commissioners and District Officers were appointed as Deputy and Assistant Commissioners of Labour, respectively. (AR 1959-1960, 10) A Labour Office was established at Auki, Malaita, in 1963, because the island was the main source of unskilled labour. Several important amendments to labour ordinances were enacted in 1964: the Trade Unions and Trade Disputes (Amendment) Ordinance 1964; the Workmen's Compensation (Amendment) Ordinance, and the Labour (Amendment) Ordinance.

During the first half of the 1960s, agriculture and the copra industry were the main employers, although employment in forestry and logging was growing. If seamen and domestic workers are included, in 1965 the total paid work force was around ten thousand. In the 1960s, a large proportion of the labour force was still unskilled men, and there was a growing and quite acute shortage of skilled Solomon Islanders as positions were localised, so a large expatriate workforce was still required in all categories. The basic rate of pay for an unskilled worker in 1965 was £8.10.0 a month and for artisans between £10.0.0 and £40.0.0 a month. Manual workers normally worked a forty-five-hour week over five and a half days. The Labour Ordinance allowed for overtime rates of not less than one and a half times the normal rate of pay, and not less than double the rate on public holidays. (AR 1965, 11)

Few women had entered the paid workforce. The expanding central and local government employment opportunities demanded higher levels of skill and training through formal courses. Some of the large government departments that had previously operated their own training schemes now used Honiara Technical Institute for training. Those school leavers with some secondary education had quite wide choices for further training, although employment opportunities for primary school leavers were still restricted.

The situation in 1974 was similar, with a continuing shortage of skilled Solomon Islanders for supervisory positions. Expatriates were used to fill this shortfall, with training for localisation an integral part of their positions. Most employers still paid wages monthly, which caused difficulties in balancing family budgets. Mainly the construction and logging industries employees were paid fortnightly and some commercial employees were paid weekly. Piece or task rates were still paid on most plantations for copra cutting and brushing. Wages had by law to be paid in cash, although some employers, by agreement with their workers, still issued rations and deducted the prescribed cash equivalents from wages. From January 1974, the base government pay rate for unskilled workers was increased to $1.35 per day paid monthly for a five-day working week of forty hours. Experienced labourers and artisans received from $1.75 to $3.60 per day. Private sector wages were similar. However, the costs of housing, transport, light and water were subject to deduction from wages, whereas in the past they had been provided free. As a result of a report from the Labour Wages Advisor Board, from January 1975 the minimum wages for seven categories of workers in Honiara were set at thirteen cents per hour for a forty-five-hour week where housing was supplied, and 15 cents without housing. Attempts were made to inspect and control the standards of accommodation in urban areas and on plantations, however, overcrowding because of customary social obligations was difficult to control. (AR 1974, 22-23) 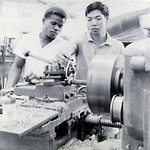