In 1899, a grant of £2,000 was made from WPHC funds to establish a second government station at Gizo, and to purchase a sailing vessel-the 33-ton yacht Lahloo-for Resident Commissioner Woodford to improve communications within the Protectorate. The main purpose was to control headhunting (q.v.) raids New Georgia Islands people were making on the people of Choiseul, Isabel, the Russell Islands, Savo and the west end of Guadalcanal. Gizo had a sheltered harbour and Woodford selected an elevated site and clearing began in November 1899. Gizo was available for settlement because it was a sort of no-man's land where the headhunters paused to wash and clean skulls while on their way home from raids. It had three problems, however: it had no reliable water supply; it was separated from the main neighbouring villages by water; and it was hot, since it did not receive the evening adiabatic breezes which cool the large islands down to 22ºC.

Materials for a residence and gaol arrived on SS Moresby later in November. In December, Arthur Mahaffy (q.v) was appointed District Magistrate (District Officer) at Gizo and established a residence, gaol and police headquarters. In 1900, seventy-five acres of coconut trees were planted and local people had begun to settle near Gizo for protection from the headhunters. The residence was situated on a steep hill with the gaol and labourers and police quarters surrounded by palisades and trenches for protection from attack. (Richards 2012, 155, 156) Prisoners from the central Solomons were sent to Gizo to avoid the risk of escape. Mahaffy used police from Malaita, Savo and Isabel and began punitive raids on the Roviana area. By 1904 he had suppressed headhunting (q.v.) in most areas, though it continued on Choiseul for some years. (AR 1899-1900, 13-14; Mahaffy 1902; O'Brien 2011)

Gizo was a port of entry until 1926, and the centre of a small European population engaged in trading and coconut plantations. Gizo's one hundred European residents petitioned and were granted a medical officer from 1919, but without provision for a hospital. A small hospital was erected of native materials two years later. Then, in 1926, Gizo residents petitioned for a resident nurse. Gizo Island by then had an indigenous population of around seven thousand. The District Officer based there was in charge of the New Georgia Islands, part of Choiseul and also Ontong Java. (AR 1925-1926, 4; Boutilier 1974, 17)

During early 1942, the Japanese occupied Gizo. They built up large garrisons in the New Georgia and Shortland areas, but on 30 June, 1942 U.S. Army units overran Rendova and then New Georgia. They created a base from which to retake Munda and its large airfield, though in the end this required heavy fighting. Gizo was destroyed by American bombardments, but after the fighting ended it was rebuilt using second-hand Japanese and American materials, much of it brought north from Munda. The water supply was built using pipes the Japanese had left in the Shortlands.

Slowly, the surrounding plantations were re-established and life returned to normal. Much as what occurred in Honiara, but on a smaller scale, by the 1960s Gizo began to develop modern amenities. A new telephone exchange and radio station was installed in 1966 and also that year Gizo's first café and teashop opened. A Township Advisory Committee was started in 1968 to facilitate cooperation between the government, churches and business interests toward developing the township. The building of roads and filling of swamps proceeded. A reticulated water system was operational by 1965. A generator supplied the 240-voltage power supply. The use of power increased rapidly in the early 1960s: it rose 60 percent in 1963, and 41 percent in 1964. The Protectorate's most modern powerhouse opened at Gizo in January 1968. (AR 1963-1963, 60, 61; NS 11 Aug. 1966, 21 Oct. 1966, 31 Jan. 1968) As in Honiara, Chinese businesses predominated. Gizo's hotel and its first bus service were owned by Wing Sun Company, and Kwan How Yuan erected a cinema in 1970. (NS 31 Dec. 1969; AR 1970, 86) 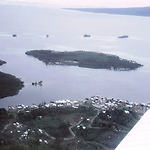 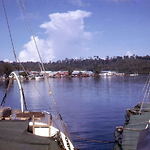 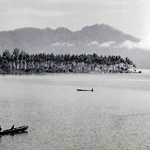 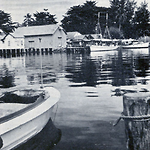 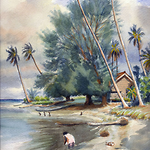