The Gilbertese re-settlement scheme was undertaken to provide new homes for the people of Hull and Gardner Islands in the Phoenix Group, where poor soils and low rainfall had caused famines. (Maude 1952) The scheme was possible because both the Gilbert Islands and the Solomon Islands were administered by Britain's Western Pacific High Commission (q.v.).

A pilot party of ten Gilbertese arrived in 1954, visiting Gizo and surrounding islands. They were followed by thirty adult men at the end of 1955, accompanied by Assistant Administrative Officer Te Karibanang, the intention being to build up to a balanced community of 120 by 1957. By that year, plans were to bring a community of five hundred to the Solomon Islands and five migrations had been settled. Further settlements were made in the Shortland Islands in the early 1960s. In 1963, an advance party of seventy cleared land on Wagina Island in the Western Solomons and a third site was planned, suitable to accommodate two hundred families, with one thousand people due to arrive early in 1964. Two brothers helped with the transition. Takarebu was an ordained United Church minister, and his brother Tim was soon to be ordained. They attended an orientation course at Goldie College and then took up ministerial duties at Wagina and at Titiana in the south of Gizo Island where there was a second Gilbertese settlement.

This was the main migration, between 1957 and 1963. Questions were asked in the Legislative Council during 1963 expressing fears that the migration could lead to a situation similar to that in Fiji with the Indian immigrants. In 1971, the Governing Council effectively stopped all further migration. The 1976 census recorded 2,753 Gilbertese in the Protectorate. Gilbertese settlements were created at White River, Honiara, Wagina Island at the southeastern end of Choiseul, at Titiana on Gizo, and at Kamaliae in the Shortland Islands. They recreated their original lifestyles, building maneaba (large meeting houses) and maintaining distinct cultural ways, which were particularly obvious in singing and dancing. Coming from atolls, they were unaccustomed to forested land and found it difficult to adapt their maritime skills to Solomons-style agriculture, and this was aggravated by the poor quality of land they had been allocated. The Dominican Gizo Diocese established relations with the new community. (O'Brien 1995, 185-168) 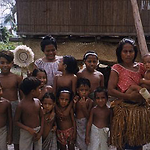