Interaction with European currency dates back to the 1870s. Labourers returning from Queensland and Fiji sometimes brought coins back with them, including gold sovereigns, many of which are thought to remain buried and forgotten. Once indentured labour began within the Protectorate labourers were paid in coins. The Protectorate introduced English pounds, shillings and pence as currency, although in 1918 Australian bank notes seem to have been the chief medium of exchange. (AR 1917-1918, 5) During the First World War labourers were paid in notes rather than coins, which caused problems when people were unable to differentiate denominations. Cash began to circulate again in larger amounts once the Head Tax was introduced in 1921-1923, and at about the same time cash began to be used more in transactions that had once involved barter, or shell or other valuables. English pounds were replaced by a Protectorate currency from the First World War until 1937. The BSIP currency was in notes of 5/-, 10/-, £1 and £5 denominations, but these were never popular with the local people who distrusted paper currency and preferred coins. The local currency ceased to be legal tender on 24 September 1937 when Australian currency was introduced, supplemented by the remaining British currency still in circulation. Labour wage payments were usually in silver shillings. During the Second World War the Japanese stamped Japanese words across the currency and continued to use it. They also issued a half-shilling invasion money note, officially known as Southern Development Bank Notes, intended to replace the Australian and British currencies. 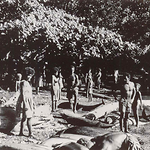