Solomon Islanders working in Queensland began using the Queensland Government Savings Bank in the 1880s. Those that stayed in Queensland and Fiji until the 1900s often had substantial sums saved in the banks. In the mid-1900s, Solomon Islanders engaging as labourers in the Protectorate invariably asked to be paid in coin rather than trade goods, while those returning from Queensland and Fiji frequently brought several pounds with them, and in some cases even bank deposit receipts. Many returned from overseas plantations with coins, even gold sovereigns, and kept them in bottles buried in the ground. (Moore 1985, 182-183; Woodford, Report on the BSIP, Mar. 1897, p. 15, 225/50, CO)

Merchant companies such as Burns Philp & Co. and W. R. Carpenter & Co. provided early commercial services, including banking and credit facilities, but only for foreigners. Solomon Islanders could only gain credit facilities through traders who sometimes advanced cash to them. They were protected by the Native Contracts' Regulation (No. 2 of 1896) under which no civil action could be taken to recover debts from Solomon Islanders, and the government discouraged cash advances. Solomon Islanders also often refused to recognise debts negotiated by a company when one company representative was replaced by another, which was cited to justify refusing credit. Mixed-race Solomon Islanders were usually able to access limited credit. In 1918, the Protectorate issued its own paper currency (notes to the value of 5/-, 10/-, £1 and £5) to supplement the United Kingdom currency, Australian Commonwealth bank notes and gold coins in circulation. Onwards from 1919, the local currency was also used to pay labour, and £4,154 of it was in circulation. (AR 1917-1918, 5; AR 1918-1919, 4)

District Officers also served as postmasters and from the 1920s ran a money order service through the Commonwealth Savings Bank of Australia, which enabled money to be remitted throughout the world. (AR 1922-1923, 6) Before the Second World War, Protectorate residents could transact banking long-distance through Suva and Sydney, or use the Commonwealth Bank of Australia Savings Bank branches at Tulagi and Faisi, Shortland Islands, both established in 1931. (AR 1931, 12) After the war, there were no banks in the Protectorate, even though an estimated £A227,020 was in circulation. United Kingdom currency was also legal tender, though in fact it was seldom used. (NS 31 Jan. 1969; AR 1953-1954, 16, AR 1957-1958, 15) All banking was transacted through the Protectorate Treasury. The first full Solomon Islands branch of the Commonwealth Bank of Australia (CBA), with trading and Savings Bank facilities, was opened in Honiara in early July 1951, with Savings Bank agencies established soon after in Auki, Gizo, Kirakira, Lutee (or Lata), Choiseul Island, and Yandina (Russell Islands). By 1964, the CBA had Savings Bank Agencies attached to its Honiara branch, operated on its behalf by the Protectorate Government at Auki, Malu'u, Gizo, and Kirakira, by private enterprise at Yandina, Rendova and Liapari, Vella Lavella), and by the Santa Ysabel Council at Tataba. (AR 1963-1964, 20) The Australian and New Zealand Bank (ANZ) opened its first branch in Honiara in mid-1966. The CBA's first permanent outstation was established at Gizo in 1969. The Hong Kong and Shanghai Banking Corporation began operations in Honiara on 17 December 1973. (PIM May 1951, July 1951; AR 1951-1952, 15, AR 1953-1954, 17; NS 7 May 1966, 31 Mar. 1969, 4 Jan. 1974; Bennett 1974, 31, 1987, 257) 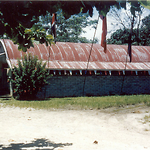